A Nod To Noir 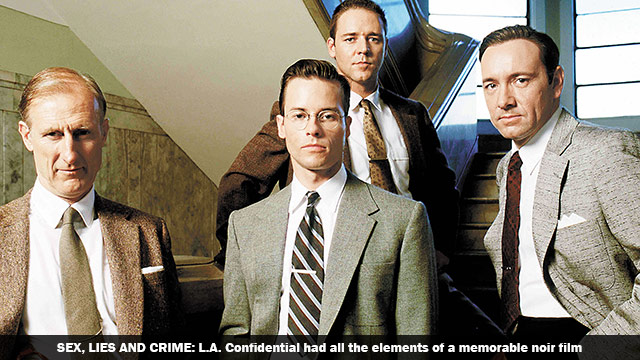 08 June, 2015
Print this article Font size -16+
The americans invented many things; they also invented film noir, or ‘black film’. Well actually, it was French critic Nino Frank, who first used the term in 1946 to describe stylish Hollywood crime dramas. Critics still argue whether noir qualifies as a film genre, since the films in question could just as well be described as sexy or erotic murder mysteries and dark thrillers. I am not wading into that argument, although my gut is somehow always able to tell the difference: I think it’s got to do with a particular proportion of sexiness, erotica or sleaze combined variously with bleakness, cynicism, obsession, drugs and murder. Whatever that proportion may be — or if, indeed, there is such a proportion — noir (or if you want to be specific, also its variation, neo-noir, referring to films produced mid-1960s onwards) remains my favourite film genre.

If there’s one noir film that hooks me every time with its juicy plot concoction of Los Angeles’s narcotics mob of the early 1950s, a high-class prostitution ring, power, politics and corruption in the city’s police force, and a series of clinical murders, it is the Curtis Hanson-directed L.A. Confidential (1997). LAPD cops Sergeant Jack Vincennes (Kevin Spacey), Officer Bud White (Russell Crowe) and Sergeant Ed Exley (Guy Pearce) are all far from model cop material, but in this tale they emerge as heroes in the bigger criminal scheme of things. Trying to use the system to fulfil their personal goals and obsessions the trio get played by it, are chastened, and finally, redeemed. Exley, particularly, has a brilliant character arc and a then young and handsome Pearce played him to perfection.

Hanson and Brian Helgeland’s screenplay, adapted from the novel by James Ellroy, is packed with suspense, but it has brilliant gags, dry humour and quote-worthy one-liners, too. Sample this: Vincennes and Exley visit a bar to question a suspect, who is engrossed in conversation with a decked-up woman. Exley thinks she is a Lana Turner-lookalike prostitute and smugly says it to the woman’s face; Vincennes tells him she is the real Lana Turner; and Exley has a drink thrown at his face by the star.

Released the same year as Titanic, which swept the Oscars with a record-equalling 11 wins, in retrospect, L.A. Confidential seems to be the one deserving of all awards. Of course, Kim Basinger did snare the Oscar for Best Supporting Actress for the movie; so did Hanson and Helgeland for Best Adapted Screenplay.

Los Angeles has served as the setting for film noir right from the 1940s; a casual glance at the city’s history is enough to tell you why. It’s the place where Hollywood royalty hobnobbed with notorious gangsters and the nexus of corruption and sleaze between the police, government officials and the wealthy ran high. Much before L.A. Confidential, Roman Polanski’s Chinatown bared the city’s underbelly in 1974. For private investigator Jake Gittes (Jack Nicholson), a case that starts out as a regular snoop into adultery committed by the chief engineer of the city’s water and power department quickly snowballs into murder, lies and incest, culminating in a tragic, personal déjà vu relating to Chinatown. Robert Towne’s Oscar-winning original screenplay set in 1937 is the stuff of breathless praise even today. If you haven’t watched this one, you have missed out a lot.

If ever an award is instituted for noir atmospherics and style, it would go to Nicolas Winding Refn’s Drive. Set predominantly in night-time LA, the film’s dark tones accentuated by occasional golden halos of light and slow-moving shots (not slow motion) define its mood. So does the intentionally tacky, golden-scorpion-embossed silver jacket that Ryan Gosling’s unnamed protagonist wears in almost every scene. The new-age electronic score by Cliff Martinez along with the songs ‘Under Your Spell’ and ‘A Real Hero’ are inseparable from Drive.

Gosling’s character works at a car repair shop and part-time as a stunt double on films. He also moonlights as a getaway driver for criminals. A man of few words and fewer belongings and relations, he finds himself attracted to next-door neighbour Irene, a married woman with a child, whose  husband is in jail. Always living on the edge of the world of crime, but never falling into it, the driver ultimately becomes a brute killer to protect Irene and her son, whose lives are endangered after her husband is shot dead. Drive won Refn the Best Director award at Cannes.

David Cronenberg’s A History of Violence (2005) is the perfect accompaniment to Drive. Both films project violence as the only recourse — problematic as it may be — for some people to restore peace (yes, the irony!), but not without irreversible, life-long repercussions. Cronenberg’s film, in fact, makes this point more strongly.

The happy and uneventful lives of  Tom Stall (Viggo Mortensen) and his family in small-town America are jolted by an incident in which he expertly guns down two thugs, who wanted to rob his diner. Soon, mobsters from Philadelphia arrive, claiming that Tom is notorious gangster Joey Cusack. Tom is forced to return to his old, violent self to protect his family. When he returns home, we realise this family will never be the same again as the spectre of  Tom’s past and his propensity for violence will have redefined his relationship with his family. The unnerving denouement makes this a thought-provoking noir.

A History of Violence shows that greed and savagery are not endemic to big cities alone; it takes just one trigger to shatter the veneer of contentment in small towns. For me, no film does this better than Fargo (1996) and no one portrays low lives more accurately or in a more morbidly funny way than the Coen brothers, Joel and Ethan. This apart, Carter Burwell’s elegiac signature tune, which opens the movie in North Dakota’s snowed-out Fargo; Roger Deakins’s marvellous stark cinematography and the sing-song accents of many of the characters are of great recall value.

An incompetent car salesman, Jerry Lundegaard (William H. Macy), in desperate need of money, tries to get his wife kidnapped by two criminals so that he might extract the ransom from his wealthy father-in-law. However, things don’t go according to plan and bodies pile up. A seven-month pregnant local police chief, Marge Gunderson (Frances McDormand), investigates the murders, which she later ties with Lundegaard and the disappearance of his wife. In the end, the criminals get their due in one way or the other, as Marge tells one of them, “There’s more to life than a little money, you know.” Sublime stuff, which in any other movie, could have sounded jaded. McDormand scored an Oscar for Best Actress in a Leading Role for playing Marge, one of the most memorable screen characters of all time. In fact, all the characters — even the ones having one or two scenes — leave an impression. A hat-tip to the Coen brothers.
(This story was published in BW | Businessworld Issue Dated 04-05-2015)
Tags assigned to this article:
magazine entertainment more 4 afterhours lena saha magazine 13 may 2015