A New Headache For Raghav Bahl 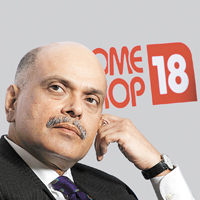 Bahl did not respond to BW's questions. However, in a reply filed in 2009 in a derivative action suit filed in the Bombay High Court by several e-18 shareholders, he had said the shareholders agreement that made e-18 the sole vehicle of expansion had been terminated in 2003. He had also produced a letter of May 2006 from ICICI Ventures, an erstwhile 7 per cent shareholder in e-18, stating that the shareholders agreement was dead. This is disputed by the minority shareholders who say no process of annulment was ever initiated by Bahl.

The complaint attacks the RIL investment for inadequate disclosure. It says Network18 has publicly admitted market capitalisation of less than Rs 600 crore. Given the promoters' stake of 58.54 per cent, the market value of this stake is Rs 350 crore. RIL, however, is investing about Rs 1,700 crore for the promoter's holdings, with Raghav Bahl all the while claiming to retain a 51 per cent stake as well as management control.

An RIL spokesperson had earlier told BW that it was not known how the optional convertible debentures (OCDs) worked or when they would and how they would be converted into equity. At an analysts' conference call, Bahl had said: "The detail best stays in the private domain."