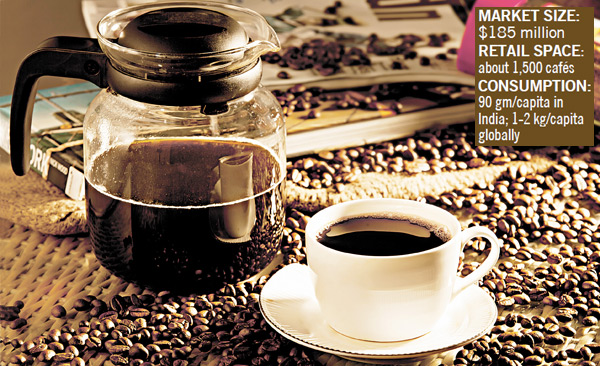 Cafés in India are being shaken and stirred as new players plan entrance strategies. Ajay Kaul, CEO of Jubilant Foodworks, will be ready to serve Dunkin' Donuts by mid-2012. "The core team is almost ready. We are recruiting strategic (team) heads. Sourcing of beans will be done locally. We have identified partners for it," says Kaul. But he knows that it will be no walkover. In the US, Dunkin' Donuts has a beverage-to-food mix of 70:30; when it steps outside, it is typically 60:40. But says Kaul: "The initial focus will be on food. Once the coffee category explodes (in India), we will focus on coffee."

Points out Deepak Laxmi, director of research at MAPE Securities: "Dunkin' Donuts is not a highly known brand in India like Starbucks. This is a price-sensitive market. But they do have a master franchisee that understands the local consumer very well." Laxmi is referring to Jubilant's success with Domino's Pizza.

Then, there is Starbucks and its range of gourmet coffee. It has teamed up with Tata Coffee for beans; more will be spilled if it decides to brew in retail with the Tatas.

But behind all this hectic activity lies the fact that coffee consumption in India is low — just 90 grams per capita versus 1-2 kg per capita globally. The retail café size is $185 million, and split between 1,500-odd cafés. "We are in grams and they are in kilograms," quips Madhva, who has his finger on the pulse, since 78 per cent of the cafés in India are CCD outlets.

Consumption, however, has been increasing exponentially. The Coffee Board's figures show coffee consumption has almost doubled to 108,000 tonnes from 55,000 tonnes in 2000. Sooner or later, absolute volumes will make up for the lower per capita spend on coffee.

According to a report by management consultants Technopak, India can absorb an additional 2,300-2,700 cafés over the next five years, with 70 per cent of these being in the top 24 cities. "Over the past few years, 3-4 chains have come in. But when global giants come in, it creates excitement," says Madhva. "Starbucks will help the market grow faster. It will affect Gloria Jeans, Barista and Costa Coffee, which target the top 20 per cent of urban consumers. It (the fight) will come down to who gets what space," notes MAPE Securities' Laxmi. Aware of this, Indian café chains are marking their territories.

A Coffee Break
CCD, for instance, plans to increase the number of its highway outlets from the current 5 per cent. "There are hundreds of highways, and each can easily take six CCDs. The café culture is beyond just serving coffee and CCD has a flexible format," says Jacob Kurien, partner at New Silk Route Partners, a private equity firm that invested $75 million in CCD three years ago.

With 75 cafés, Costa Coffee — master franchised in India by Devyani International RJ Corp — plans to add 60-100 outlets every year over the next four years. "I would just focus on airports; they are the most profitable. One airport outlet equals the business of four high-street outlets,"  explains Unni. Costa Coffee has six airport cafés (three each in New Delhi's T3 and T1 terminals). "But there aren't too many airports coming up in India," he admits, which means Costa has to look beyond airports. The company's "non-Costa" strategy, too, will have to take into account that folks who walk in expect more than just coffee. "We maintain 4-5 pricing structures and it depends on the catchment areas," says Unni.

A crossover entrant is Hindustan Unilever's Bru. About four months ago, HUL extended its Bru brand to Bru World Café, as a pilot project. "We have opened six cafés in Mumbai. The plan is to open 10 this year in different formats.

break-page-break
Out-of-home consumption is an important driver for coffee as a category," says Arun Srinivas, general manager of beverages at HUL.

A part of Dunkin' Donuts' strategy is to cater to the middle- to upper-middle class. "We will be in high foot-fall areas. A part of some outlets will be takeaway," says Kaul, who plans to set up 100-120 stores in the next five years.

The biggest entrant is likely to be Starbucks. In May, it announced it will acquire full ownership of its retail operations in some parts of China as a part of its plan to make China its biggest market after the US. Of the 800 new stores it plans to open this fiscal, 600 will be outside the US (a quarter of these will be in China).

Starbucks' India retail plans will be clear after its discussion with Tata Coffee. But a Starbucks-Tata retail coffee foray would be formidable — it will have access to Indian Hotel's Taj, Vivanta, and Gateway properties.

So where do recent entrants such as Gloria Jeans and Coffee Bean and Tea Leaf stand? Coffee Bean and Tea Leaf operates in large retail formats — typically 2,000 sq. ft — in malls, high-street centres and airports. "We are looking at corporate parks that can accommodate 500-10,000 people. Four such cafés are in the pipeline in Mumbai. There are similar plans for Delhi," says a representative.

Out Of A Box
Coffee is consumed through three channels in the out-of-home (OOH) category — cafés, instant coffee mix or pre-mixed, and freshly brewed. "The café category has exploded. But the OOH hot coffee consumption is dominated by instant coffee vending machines," says Shourav Mukherjee, director of commercial beverages at Georgia, which entered India in 2001 backed by Coke. It currently operates 3,000 vending machines, mostly through institutional businesses with McDonald's, Subway and PVR. "We do not discount the possibility of entering the retail space in the future. This will primarily be beverage-focused retail spaces, and not full fledged cafés but kiosks," he says.

But it is Lavazza that leads in vending machines. With a turnover of €1.1 billion in 2010, and a global market share of 48 per cent, Lavazza wants to be big in India too. It acquired Barista, and Fresh and Honest vending machine business in 2007. It also services top hotels, large corporates and even individuals (Mukesh Ambani and Vijay Mallya are its patrons). At present, 5,000 Lavazza vending machines dish out 300,000 cups of coffee daily. The company also has high-end personal use coffee machines — Lavazza Blue, launched in 2008, has sold 1,630 units.

For retail café leader CCD, 10 per cent of the business is from un-manned vending machines and cafés at corporate parks. "The institutional segment will be big as large corporate parks that have 5,000-25,000 people proliferate. The percentage profit margin is lesser in the vending business, but volumes are so huge that other overheads are lower," explains CCD's Venu.

Says Devangshu Dutta, CEO of consumer products consulting firm Third Eyesight: "With growth of cafés in the past 12 years, the scenario has changed. Coffee is now seen as a premium product with emphasis on how it is served and brewed. But the market is far from saturated."