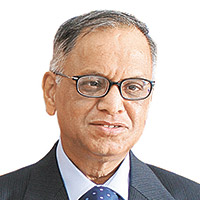 08 November, 2014
Print this article Font size -16+
N.R. Narayana Murthy, co-founder of  Infosys, has floated an e-commerce joint venture with the world’s largest online retailer Amazon through his private investment firm Catamaran Ventures to help small and medium businesses join the online bandwagon. Murthy’s family office holds 51 per cent stake in the venture. Currently, the two partners are working on a back-end-operations structure for the venture as foreign direct investment in e-commerce is not allowed in India.

back of  an eKart delivery boy’s bike, delivering orders  at customers’ doorsteps. The drill of personally delivering orders was initiated two months ago by co-founder and chief operating officer Binny Bansal. In the coming months, over 85 senior executives will undertake this drill.

Juncker Strikes Gold
The new president of the European Commission, Jean-Claude Juncker, 59, is set to earn £1.8 million over the next five years. The former Luxembourg prime minister will earn £245,629.70 a year — almost double the package of British Prime Minister David Cameron, who was also in contention for the EU post. The salary is topped up by a residential allowance of £184,222 over five years, plus an expenses deal of £1,136 a month. On leaving office, he will receive a £20,469 resettlement allowance, a transitional allowance of £98,252 for three years, plus a pension worth £52,500.

A Free Lunch
Recycling magnate Chen Guangbiao hosted lunch at a fancy Central Park restaurant for 250 homeless New Yorkers. He regaled the guest by singing ‘We are the world’. His original plan was to invite 1,000 guests and give everyone $300 in cash. But security concerns forced Guangbiao to change his plans. He instead donated $90,000 to a charity. Earlier this year, the 46-year-old businessman wanted to buy The New York Times. Its chairman Arthur Sulzberger Jr. said the newspaper was not for sale.

The Inheritance
There are others ahead of him for the throne, but Prince Harry is in line for a huge award. He is scheduled to receive £10 million on his 30th birthday on 15 September as an inheritance from his late mother Diana. He,

however, faces a £4 million deduction due to inheritance tax, which experts say he could limit to £3.6 million if he donates some of the cash to charities. His older brother William too paid 40 per cent tax when he received his inheritance. Diana’s estate was worth £13 million after tax at the time of her death in 1997.

Ace U His Sleeve
Former Indian tennis player Vijay Amritraj has lent his name to an Indian wine label. The Grover Vijay Amritraj Reserve Collection was launched in London at a Wimbledon-themed party. His collaboration with premium wine producer Grover Zampa Vineyards is aimed at the UK market. The collection of red and white wines is inspired by Amritraj’s legendary feats on the tennis court and priced at around £14.99.

Fighting Spirit
Jamie Dimon, CEO of JPMorgan Chase, has been diagnosed with throat cancer, but the ailment is at an early stage.  In a memo to employees and shareholders of the largest US bank, the 58-year-old has said that the prognosis is excellent and that he will continue to be actively involved in the company during his treatment, which is expected to last eight weeks.

The Chosen One
Robert McDonald, former chief of Procter & Gamble (P&G), has been appointed head of the Department of Veterans Affairs by US President Barack Obama. The 61-year-old replaced former secretary Eric Shinseki, who resigned in May amid revelations of systemic failures in caring for veterans and large-scale cover-ups of those failures.