A Nation, And A Magazine, On The Rise 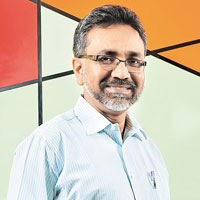 
No sooner had I taken over than the Vajpayee government decided to shake up the sands of Pokhran with a nuclear explosion. We were discussing how to handle that week's issue and I remember the advice one senior colleague gave me.  "Ask yourself what Ninan would do," he said, referring to T.N. Ninan, my predecessor, former boss and probably the most influential business journalist in the country. If that comment implied a certain lack of confidence in the new editor, I pretended not to notice! With a novice at its helm, I think we pulled off that issue without disaster, but soon other bombs were to go off.

A few weeks into my editorship, a consultancy firm that ABP had hired was considering what to do with BusinessWorld — let it go, or let it grow. The magazine had lost some circulation and was in danger of falling further behind. But I saw a silver lining. If the magazine was not doing well and, at the same time, the nation was making a radical break with the past, then this could just be the perfect time to recast it! If we were able to get the transition right, we could become the voice of a new India and our troubles would be history.

The structure of the Indian economy and the power equations within its business class had changed dramatically in the 1990s, but the mainline business dailies and magazines had not yet grasped this fact. There were new sectors and new leaders driving growth, but you wouldn't have known it from reading the business media. That was understandable, in a way — they had their own existing relationships and readership to protect. BusinessWorld, on the other hand, had not much to lose.

We, therefore, started going after stories of a radically different kind from the ones people were used to reading. We put a lot more emphasis on the fast-growing services sector (especially IT, telecom and retail); on emerging business leaders; and on the start-up scene. We were getting into areas that traditional business papers and magazines had so far found either uninteresting or unimportant. Indian business was undergoing a dramatic transformation, and there was an increasing thirst for the information we were providing.

The first ever story on the potential of business process outsourcing (BPO) was on the cover of Businessworld, in January 1999. It was titled "Teleworking" because the term BPO had not yet been coined. The subhead said: "The Hottest Business Opportunity for India!"

In some ways, Businessworld helped sensitise the establishment to the changing economic reality. I remember a Budget roundtable we organised early on, which had R.P. Goenka and Narayana Murthy as participants, among others. In our minds at least, Goenka was there to represent the establishment and Murthy, the upstarts in IT services. The two had not yet met, and Murthy was introduced to Goenka by one of the participants as the "new IT whiz kid from Bangalore"! It is difficult now to imagine Murthy as being a ‘whiz kid' from anywhere, but then, this was the time when the Confederation of Indian Industry used to be called the Confederation of Indian Engineering Industry; the time when ‘real businessmen' made ‘things' from steel and lesser men went into services.

Just on the strength of new stories and a new focus, Businessworld's circulation started rising week by week, and in a few months it grew by over 50 per cent. This was even before we had changed the magazine's frequency from once a fortnight to once a week and cut down its size and price.

We did lose a number of our readers who disliked the shift in focus, but we gained many times more than we lost. We also lost many among our staff who thought the changes were unnecessary. In fact, within a year of my joining, most of our journalists were gone, having voted with their feet and walked out of the door.

We started with a staff of about 71 in April 1998 and about a year and a half later, that number was down to 51, made up mainly of new recruits. Of the original staff, barely seven or so remained. I can only say that my communication skills must have been remarkable for it to have produced that dramatic an effect. Talk about inspirational leadership! I would come into the office every morning wondering who was going to leave that day — and what would be up on the office notice board. Those who thought the magazine was going downhill despite the rising circulation would put up newspaper cartoons depicting clueless bosses making bone-headed decisions. I still wince at the sight of Dilbert cartoons!
However, we managed to retain some senior staff and build a core team of editors and writers who together shaped a new Businessworld, one that captured the zeitgeist of changing India. The change was not just in terms of what stories we covered, but also how they were covered.

All issues now had to be understood within the global context as much as the local context. It was as if we were suddenly asked to paint on a much larger canvas, with bolder brushstrokes. There were new skills to be acquired and new standards to be adopted.

The strength of the team is visible today from the fact that many have gone on to head some of the most respected business publications in the country — Prosenjit Datta, editor of Businessworld; Niranjan Rajadhyaksha, executive editor of Mint; D.N. Mukerjea, editor of Fortune India; Indrajit Gupta, editor of Forbes India; M. Anand, former editor of Outlook Business …

The list is too long to fit into this piece, but the recast and resurgence of Businessworld would have been impossible without them, and without every one of the many others not mentioned here by name. Between 1998 and 2001, Businessworld's stand sales and subscriptions went up from 30,000 to over 100,000 and it was well on its way to becoming the largest-selling and the most-read business magazine in
the country.

Leading Businessworld during one of the most eventful periods in India's business history was a richly rewarding experience. As I wrote in my farewell letter in Businessworld in 2007, no other job could have helped me better understand the passions and demons that drive this country's growth.  The business leader I know in Hyderabad who takes pleasure in proving to the pharmaceutical multinationals that they were wrong — and racist — to doubt his scientific capabilities; the bureaucrat in Delhi who is trying to make sensible policy while coping with irreconcilable demands; the student in Chennai who wants to know where his opportunities lie; the minister who would like to make a mark, but would much rather amass a fortune first… their individual whims, dreams, fears and greed are what make India's growth story what it is — a meandering tragicomedy with a thin central plot of a nation on the rise, but with lots of sub-plots built around a messy, populist democracy prone to narrow-mindedness and violence; an inordinately corrupt political system; shameful  inequalities of opportunities; and the heroic efforts of some to overcome those limitations.

Businessworld has had a remarkable three decades as witness to history, and mid-wife to many new ideas. As it embarks on its fourth decade, I have no doubt that it will continue that tradition with characteristic zest, integrity and commitment.