A Leg-up To The Major League 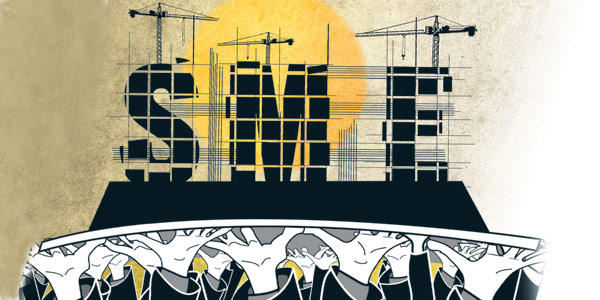 08 November, 2014
Print this article Font size -16+
For V.A. George of thejo Engineering, it was a big decision to say ‘No’ to a clutch of private equity (PE) investors in 2012. Instead, he chose to list his Rs 133-crore company (then much smaller) on the National Stock Exchange’s (NSE) small and medium enterprises (SME) bourse, Emerge. His friends and business associates scoffed at him, but George stood firm. “We wanted to raise funds, but I was sure I didn’t want PE funds on board right now. Listing will help us in the long run. And once we attain size, we’ll automatically move up to the main exchange,” he says.

George has already started reaping benefits from listing on Emerge. “Clients are treating us with more respect now. Our relationships with public sector unit (PSU) clients have improved; they are taking us more seriously. Our credibility has gone up by a good measure. Even banks are showing more willingness to work with us these days,” says Thejo Engineering’s president and CEO.

The company is among 55-odd SMEs that listed on the designated SME platforms of the Bombay Stock Exchange and NSE. Since March 2012, BSE’s SME Exchange and NSE’s Emerge have enabled SMEs to raise Rs 553 crore through initial public offerings (IPO). “The platform has helped small companies by providing access to equity capital and exposure to equity investors. The market capitalisation of companies listed on the BSE SME platform has already crossed Rs 5,677 crore (on 26 March),” says a BSE spokesperson.

The SME Paradigm
Since the mid-1980s, the Indian government has been propagating the positives of SMEs and the role they play in nation-building, economic development and betterment of society. Yet, over 90 per cent are unregistered and operating in the unorganised sector.

SMEs in India contribute around 12 per cent to the gross domestic product (GDP). They also account for around 45 per cent of industrial production, 40 per cent of exports and 15 per cent of employment in the country. In hard numbers, around 26 million SMEs provide employment to over 60 million people. There are over 6,000 products — ranging from traditional crockery to hi-tech gadgets — that are manufactured by SMEs in India.

Indian SME figures pale when one looks at the contribution of small businesses to the GDP of countries such as the US and UK. Small businesses in these countries contribute 40-60 per cent of the GDP and provide employment to over 50 per cent of the workforce. This highlights the fact that Indian SMEs are squarely undernourished. “Factors such as working capital shortage, high cost of credit and collateral requirements plague SMEs in a big way. Banks are positive about lending to SMEs, but they are worried about rising defaults and NPAs (non-performing assets). Funding still remains a big challenge for SMEs,” says Mukesh Mohan Gupta, president of the Chamber of Indian MSMEs (CIMSME).

Lack of technology, low production capacity, inadequate market support, constraints on modernisation and expansion and non-availability of skilled labour at affordable cost are other constraints faced by Indian SMEs, according to a recent CIMSME report. Scarce funds and insufficient credit facilities pose the biggest threat to small businesses in India. Unlike large corporates, the SME sector is heavily dependent on debt. SME owners use their own funds or loans from friends and relatives to meet funding requirements. “There are around 39 million SMEs in India. Of this, 92 per cent are not getting any benefits from banks. Also, banks take 3-4 months to clear credit proposals forwarded by them. Such issues add to SMEs’ woes,” says Chandrakant Salunkhe, president, Small and Medium Business Development Chamber of India.

On paper, SMEs have numerous funding options. Banks, venture capital (VC) funds, government-run financing firms and private non-banking finance firms have exclusive mandates to invest in them. Despite a host of lenders, Indian SMEs are starved of capital. “Although 94 per cent of MSMEs are unregistered, the sector has been growing consistently over the past five years at 11.5 per cent a year, which is higher than the overall GDP growth. Considering the growth opportunities here, MSMEs need both debt and equity in good measure,” says Sushil Muhnot, CMD, Small Industries Development Bank of India (Sidbi).

Quoting an International Finance Corporation  report, Muhnot says, “There is an addressable gap of Rs 67,000 crore for equity and risk capital products for MSMEs.” SIDBI Venture Capital’s India Opportunities Fund has invested in three SMEs listed on the bourses.

The Listing Idea
Markets regulator Securities and Exchange Board of India (Sebi), in September 2011, allowed stock exchanges to open separate platforms to list SMEs. This concept is similar to the OTC Exchange of India and BSE IndoNext, which were launched in the early 2000s, but failed to take off due to poor market participation. “An SME exchange is a unique platform where entrepreneurs can raise equity capital for growth and expansion. Investors, on their part, can identify and invest in good companies at an early stage,” says Anil Bhattar, COO, Radisson Consulting.

According to Sebi rules, SMEs with post-issue paid-up capital of up to Rs 25 crore can list on an SME exchange. The firm should have at least Rs 1 crore worth of tangible assets and should have reported distributable profits for two out of three years. If the SME doesn’t have the required track record, it will have to show a minimum net worth of Rs 3 crore. The regulator has directed merchant bankers to underwrite the issue in toto; this, in a way, assures the promoter that the issue will be subscribed to completely.
break-page-break
Also, SMEs need not take regulatory approvals to list on the exchanges. They can do so by simply taking permission from the stock exchange on which they want to list. Compliance and disclosure norms too have been simplified in the case of SMEs. Listed small businesses are required to make only half-yearly disclosures. To cut investor servicing costs, the regulator has asked SMEs to merely upload soft copies of annual reports on their websites. “There is a growing community of risk investors who are interested in investing in small firms that have exponential growth potential, with infusion of capital,” says an NSE official on condition of anonymity, adding, “Investors such as PE and VC firms have also shown a lot of interest in this platform and all three issues on NSE Emerge have seen a good response from institutional investors.”

The cost of listing an SME is much lower than that of a regular public issue or even a PE placement. In the case of a normal IPO, say, to raise Rs 200 crore, companies will have to set aside 10-12 per cent as issue expenses. To raise over Rs 500 crore, firms will have to bear an expense of 6.5 per cent. Placement costs in the case of a PE deal could work out to around 4 per cent.

“To list on SME platforms, firms will incur a fixed cost of Rs 45-50 lakh; this will take care of formalities such as due diligence, legal charges, preparation of the draft red herring prospectus and listing fees. Firms will also have to shell out an extra 1 per cent of the issue to meet placement and merchant banking expenses,” says Deepak Sharma, MD, Sarthi Capital Advisors.

According to Sharma, SME owners derive better valuation multiples by listing on the exchanges. SME shares can be listed on the exchanges at 15-20 times their price; the same company may just manage a 6-8 times valuation support in a stake sale to PE investors. “It’s a win-win for all parties involved. The investor benefits from getting a chance to invest in growth-stage companies with few liabilities and higher growth prospects,” adds Sharma.

Sebi, in an attempt to protect gullible small investors, has set the minimum IPO application money in the case of an SME at Rs 1 lakh. To provide liquidity, it has allowed daily ‘market-making’ (issuing buy/sell quotes) for three years. According to merchant bankers, nearly 80 per cent of investors in SME issues are high net worth individuals (HNI). “This has to change… There’s a need to bring in more retail investors; this will also increase trading volumes in SME stocks. Without adequate retail participation, SME exchanges may find it difficult to grow,” says Sarthak Vijlani, director, Guiness Corporate Advisors.

In terms of market performance, as of early March, most SMEs were trading at a premium to the offer price. Shares of companies such as Eco Friendly Food, Esteem Bio, GCM Securities, HPC Biosciences, among others, gained 3-15 times post-listing. The BSE SME IPO Index, which started with a base of 100 in December 2012, appreciated 85 per cent by March this year. Liquidity is, however, dismally low in both exchanges.  “Revival in primary markets will make SME exchanges more popular. This will bring in more investors too. As of now, it is difficult to convince investors (especially HNIs) to park their money in SMEs. They may come in when the broader markets are less volatile,” says Sharma.

“Measures need to be taken to encourage institutional participation on these platforms, including insurance companies, banks and mutual funds. SMEs, on their part, must be willing to subject themselves to a higher level of corporate governance and disclosure requirements,” says Muhnot.

Industry-watchers such as Salunkhe see exchange platforms as just one of the many “insignificant routes” to raising working capital for SMEs. “Listing is surely not a good idea for young or startup companies,” he says.

From the looks of it, it may take many years — and several conceptual changes — before exchanges become an effective route for small businesses to mobilise life capital.