A Journey To José Saramago 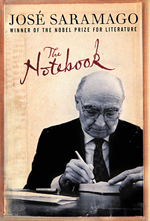 I only spoke because it was impossible to continue any longer in silence," says Jose Saramago. Unlike his novels, this anthology of blog entries by the Portugese littérateur is barely complex. The Notebook (Verso) is direct and enchantingly sharp. So lyrical that each entry is a rouge sonnet. Saramago's notes start from the eve of the 2008 US Presidential polls, and covers a year. The Nobel laureate comments on almost everything — bankers, finance capitalism, Argentina's hapless mothers, rights of Indians on the indigenous reserve at Brazil's Raposa do Sol, etc. And records his takes with sound rationality.

One finds few reasons to disagree with Saramago. For instance, he writes, "For over 30 years, Davos has been the neocon academy par excellence, and as far as I can recall, not a single voice was raised inside that heavenly Swiss hotel to point out how dangerous were the paths taken by the economy and the financial services."

He is razor-sharp at times: "On the subject of the chimera that is the G20, just three questions: Why? What for? For whom?" And thoughtful: "To read Mahmoud Darwish, besides being an unforgettable aesthetic experience, is to embark on a Via Dolorosa along with broken road of injustice and ignominy..." For Saramago's admirers, this work, translated impeccably from Portugese by Amanda Hopkinson and Daniel Hahn, is nothing short of a treasure.