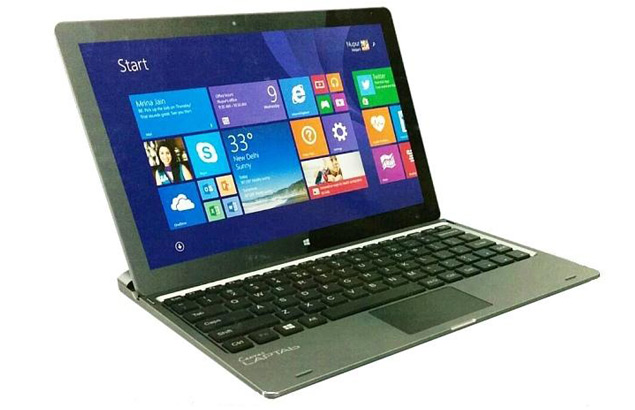 08 June, 2015
Print this article Font size -16+
Windows 8/8.1 was a big attempt by Microsoft to bring in a new ecosystem that could work on touch devices as well as the traditional PC. Sadly it has faced a lot of criticism due to the clunky interface and the repeated failures of trying to use your finger as a cursor. This (still) did not stop OEMs to stop venturing into making Windows based touch devices. One of the newest members added to the Microsoft family is Micromax.
After claiming the throne for the biggest smartphone manufacturer in India, the company went on to make LED TVs last year and now it has come up with a convertible tablet called the Canvas LapTab. Ignoring the lazy name, the device promises a value for money package. Not only do you run full-fledged Windows on it, but you get free 1TB of cloud storage on OneDrive and a one year subscription of Office 2013 with three licences.
For Rs 14,999 you get a 10.1-inch HD display (1280x800) which offers great viewing angles and a good amount of brightness. Sadly the bezels are quite large and the glass panel on top of the display gets smudged very easily, fingerprint haters should stay away. The front also houses a capacitive Windows key, the front camera and an LED notification light. The back is a combination of metal and some rubber-like plastic accents to accommodate the stereo speakers, the rear camera and all the ports and buttons.

The overall finish of the tablet looks good until you get to the supplied docking keyboard. The quality here is quite bad. Firstly, the keyboard is just too cramped up, especially if you are coming down form a proper full-sized keyboard and you will end up hitting the wrong keys, but that’s just a matter of usage. Secondly the touchpad is horrible, apart from being very flimsy and unresponsive; it does random swipes and selections. Lastly the docking mechanism, which seems fairly simple, just place it on the groove and the tablet fixes itself with magnets. But the problem here is, it stays at just one angle, you cannot tilt it at all as it moves from the docking point and disconnects from the keyboard. So the laptop mode is only useful if you are using the LapTab on a flat surface.
On the inside there is an Intel Atom processor clocked at 1.8GHz with 2GB of RAM and there is 32GB of storage onboard along with expansion. There is also a SIM card slot, in case you want to use cellular data.  The performance is smooth and the hardware provides good enough power to watch HD movies however the onboard speakers are very low on volume so you better plug in some earphones or an external speaker. The cameras are dull and didn’t impress due to the lack of proper software. The battery backup is claimed to be about 8 hours but it didn’t live upto its expectations as it ran for about 6 hours straight after fully charging it, which took about 5 hours itself.
The LapTab seems like an attractive alternative to a notebook, but sadly it needs lot of  improvements. The design is not very attractive or practical and the overall user experience is not appealing. At a similar price point there are much better alternatives like the HP Stream 11, Asus Eeebook and even the Notion Ink Cain.
Tags assigned to this article:
more 4 gadgets kunal khullar micromax laptab