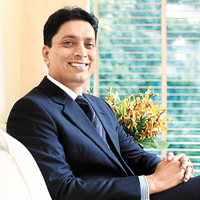 The cowboy in Balwa is also reflected in the way the company does business. For instance, its prime residential project in Mumbai Central, which is almost complete, is a large 55-storey structure. But legal permission is reportedly only up to 45 floors. DB Realty obviously hopes to get the violation regularised over time.

Loss Of Faith
Before the 2G scam struck, Nabil Patel, the company's marketing chief, outlined the growth path. Patel told BW that the company had delivered 30 million sq. ft of built-up property and had another 60 million in the pipeline. It was constructing Mumbai's tallest skyscraper — a 720-metre-high hotel at Marine Lines. Another group company was developing 3,200 luxury hotel rooms across India. The company had revenues of Rs 921 crore for FY10, more than double the previous year, and jacked up its net profit by nearly 80 per cent to Rs 252 crore.

This is a long haul from the small two-star Hotel Balwa near Mumbai Central Railway Station and a few restaurants Balwa's father had set up in the 1980s. Or, for that matter, the operations of Dynamix Dairy that the Goenka family ran as partners in politician Sharad Pawar's constituency of Baramati, near Pune.

DB Realty had good figures for FY11 too. On a total income of Rs 1,269 crore, it turned in a net profit of Rs 302 crore, up 11 per cent from the previous year. But cracks had begun to show soon after the arrests. Net profit for the January-March 2011 quarter fell to Rs 11 crore from Rs 109 crore in the previous quarter.

Brokers closely associated with DB Realty projects said some of the frontline projects in Mumbai had slowed down or stopped. Orchid Turf View, a prime residential project advertised since 2008 and spread over 16 acres near the Mahalaxmi Race Course, had stopped after the construction of a steel frame of a single tower. Orchid Heights at Mumbai's Jacob Circle — advertised as a couple of 88-storey towers more than a year ago — is yet to take off, reportedly because of opposition from local tenants. Another joint venture for the Prabhadevi Crown Mills with the Thackersays, owners of the Hindoostan Spinning & Weaving Mills, reportedly had problems with the now suspended ‘floor space index (FSI)-for-parking space' scheme.
A company spokesperson reacting to these details, said: "DB Realty has a very strong management team with accomplished professionals working across all verticals. Our results for FY11 are a clear indication of the traction of the company. All our projects are on schedule and will be delivered in a timely manner."

"They continue to aggressively market and sell, often offering huge discounts," concedes Pankaj Kapoor, CEO of Liases Foras, a consultancy that tracks realty data. "But they are facing cancellations, and the sentiment for DB Realty is not good. Many of their buyers and investors may not pay their next instalments."

For realty firms, cash flows from fresh sales are crucial to complete projects. With eroding credibility, there are doubts whether consumers will continue to buy into DB Realty projects.

Much of the group's meteoric rise, and its ability to acquire land speedily, is alleged to be the work of political levers and the Goenkas' proximity to Sharad Pawar. DB Realty and Pawar both strongly deny this. But the company will have to explain to the 2G investigators what the quid pro quo is for constructing the Sharad Pawar International School at Chandivili, Mumbai. Now that their political influence is evaporating, can the promoters complete the projects?

Shahid Balwa and Vinod Goenka can be credited with having muscled into a fairly closed property market as late-comers, and using unconventional methods to acquire an impressive land bank. Now that they have as many as 26 unfinished projects and 50-60 million sq. ft to deliver, the question is: do they have the wherewithal to complete these projects?