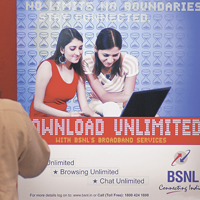 The Cabinet Committee on Economic Affairs' (CCEA) nod to the government's disinvestment plan for the public sector undertakings has left several questions unanswered. The CCEA announced "all profitable listed central public sector enterprises (CPSEs) should meet the mandatory listing of 10 per cent public ownership". And "all unlisted CPSEs", which have "no accumulated losses and having a net profit in the three preceding consecutive years should get listed on the stock exchanges".

This decision ensures that the government holding in all listed PSUs and unlisted but profitable PSUs cannot exceed 90 per cent, but it is intriguing why the government has limited itself to 10 per cent when its stated intention is to keep the PSUs as government companies with 51 per cent each? Especially, since it does not have the baggage of the Left parties in the government this time round. Secondly, observers have been left wondering about the timeline for these PSUs to hit the market because a majority of them haven't even got their board approvals for disinvestment. Third, it has set off intense speculation over the companies in which the government will eventually offload its stake.

For instance, does it cover companies such as the Life Insurance Corporation of India, which have been set up by an Act of Parliament? Or, is Bharat Sanchar Nigam or BSNL, in which the government holds 100 per cent, on the list? Finally, it is still unclear if the 50 companies that meet the requirement for disinvestment have a blueprint that will attract investors.