A Fly On The Wall Experience 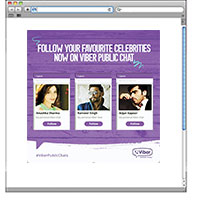 10 December, 2014
Print this article Font size -16+
The chat apps are trying to match up to the giant social networks in adding new functionalities. We have seen WeChat innovate a lot with cool new features. Now it’s the turn of Viber, better known for its free calls facility, to launch a new feature Public Chats, which allows Viber users to follow celebrities and brands. There are the usual Bollywood suspects such as Anushka Sharma, Ranveer Singh, Arjun Kapoor, Shaan and sports icons such as Sachin Tendulkar, Virat Kohli, Rohit Sharma and Saina Nehwal among others that you can follow.
With messaging apps booming in India — there has been a 113 per cent increase in the number of people using mobile messaging tools since 2013, according to Global Web Index — there’s quite a fierce battle for marketshare actually. So, it’s not really surprising to see these apps launching new features. WhatsApp still remains the number one messaging app in India, while WeChat has recorded a whopping increase in its user base. Viber has still some catching up to do in India. And this could be one way. Speaking at the launch Mark Hardy, chief marketing officer, Viber, said “Within just a few days, some of the most popular chats already have hundreds of thousands of followers, showing that users are intrigued by the experience that Public Chats offers.”
But unlike Twitter, where you can follow celebrities and brands and actually interact with them, Viber’s Public Chats seems to be a one-way street right now. The celebs converse while the users listen. In this age of interactivity, would people really like to be a fly on the wall or be a part of the conversation?
Losing Share
In the third quarter of 2014-15, Facebook dominated all other social media networks when it came to social logins. With 58 per cent being Facebook’s share and 24 per cent Google Plus. But if you look at the mobile social login stats, Facebook lost around 2 per cent share of logins over the previous quarter, while Google and Google Plus gained around 3 per cent, according to an Infographic by Gigya, a customer identity management company.

A Place To Meet
Facebook Rooms is now available in India. A Facebook Creative Labs app that is available on iOS, Rooms lets you create places for the things you are interested in. You have to choose a topic, customise the look and feel, pick a nickname and invite others to join in. You can post photos, videos and notes, if you like. You have an activity dashboard that lets you see the ongoing activity in a room. So, how is it different from groups? The standout differentiator is the cloak of anonymity that you get to wear in the Rooms.
Rise Of Social
According to Statista, in 2017, forecasts project 473.6 million social network users in China, despite Facebook being banned in the country.
(This story was published in BW | Businessworld Issue Dated 29-12-2014)
Tags assigned to this article:
magazine facebook whatsapp saina nehwal viber magazine 29 december 2014 mark hardy