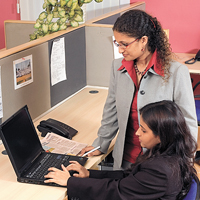 At a discussion at Mumbai's JW Marriott, Kate Sweetman, leadership consultant and a visiting scholar at MIT's Legatum Center for Innovation and Entrepreneurship, kicked off a discussion organised by The Ideas Exchange with a thought that if an organisation hired 60 per cent women and 40 per cent men at the entry level, under 15 per cent women would become a board member and under 1 per cent would ultimately make it to the CEO's job. This was the scenario in the land of equal opportunities, the US.

In India, the scene was worse. Of the 20 countries surveyed in the World Economic Forum Global Corporate Gender Gap 2010 study, Indian companies have the lowest number of women employees. Participants in the lively two-hour discussion including women executives from companies such as Procter & Gamble, State Bank of India, Bharti Airtel, Tata Group and others thought gender diversity cannot be enforced just for the sake of it. While quotas might help in correcting the imbalance, the best results will be delivered if diversity is practised as a business strategy rather than hiring women to only beef up the numbers.