A Factory Of Unrest 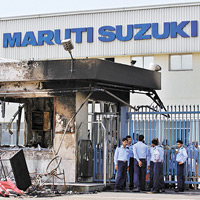 After a US probe found that HSBC Holdings had become a conduit for money launderers and potential terrorist financiers, India also might keep a watch on the London-headquartered bank's operations here. The US Senate's Permanent Subcommittee on Investigations found that HSBC's anti-money laundering compliance department, which included staff in India, was inadequately staffed. Financial services secretary D.K. Mittal hinted that the RBI was looking into the issue.

Tata's Power
The 800-MW second unit of Tata Power's 4,000-MW Mundra project is up and running now. It has been synchronised with the grid. Tata Power's total generation now stands at 6,099 MW. The company had commissioned the first unit in March. Now the company has a total thermal power generation capacity of 5,247 MW.

Strategic Exit
US oil major Chevron has bought Reliance Industries's 80 per cent stake in two oil blocks in Kurdistan region of Iraq for an undisclosed amount. RIL's exit from Rovi and Sarta blocks in northern Iraq is part of the company's overseas asset restructuring. In 2007, RIL had paid a signing amount of $15.5-17.5 million to the Kurdish Regional Government for the blocks that reportedly hold one billion barrels of oil reserves.

Hardly A Respite
Indian consumer price inflation eased a bit in June, but continued to be above 10 per cent thanks to spiralling food prices. The consumer-price index fell to 10.02 per cent from a year earlier, compared to 10.36 per cent in May, according to government data.

Her Yahoo Moment
Yahoo's new 37-year-old CEO Marissa Mayer has triggered a debate on motherhood and career in a male-dominated industry. Mayer said she was six months pregnant and would work throughout maternity leave. While many termed her decision a watershed moment signalling a shift in the way women executives handled career and life, some criticised Mayer for taking a great event lightly.

Ringing In Trouble
Ailing Finnish phone maker Nokia reported a $1-billion operating loss on $9.23 billion in net sales in the second quarter. That said, Nokia said it had net cash reserves of $5.2 billion.