A Curious Case Of Two Cities 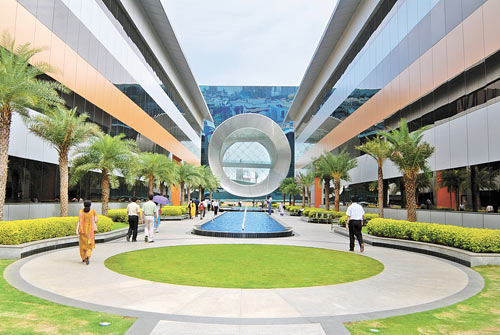 08 November, 2014
Print this article Font size -16+
A storm is brewing in Bangalore’s Electronics City. The Bruhat Bangalore Mahanagara Palike (BBMP), which runs Bangalore city, wants control over the 800-acre E-City, which houses IT heavyweights such as Infosys, Wipro, Hewlett Packard, etc.
The reason: BBMP thinks that the cash-rich IT companies are not paying enough tax. “E-city and its employees enjoy Bangalore’s infrastructure, but pay no taxes to us,” says a BBMP corporator requesting anonymity.
Set up in 1978 by the Karnataka State Electronics Development Corporation in Konappana Agrahara and Doddathogur villages on the outskirts of Bangalore, the Electronics City was originally spread over 332 acres; it has now grown to 800 acres. About 250,000 people work here in about 150 companies. Since 1997, E-City has been managed by ELCIA (Electronics City Industries Association) formed by the companies present in the industrial estate.
“We want them to come under BBMP so that companies as well as houses in the area pay their fair share of taxes for the city’s development,” says the corporator. He adds that if the IT companies in E-City were brought under BBMP, it could mop up an additional Rs 300 crore in revenues, which could then be invested for improving services in the city. “You cannot have an undemocratic closed suburb. What if Peenya or Whitefield say tomorrow that they don’t want to come under BBMP laws.”
N.S. Rama, CEO of ELCIA, pooh-pooh’s BBMP’s claims. “It is not as if we don’t pay taxes. We pay the gram panchayats Rs 1.20 per sq. ft of land in taxes every year. On top of that, each company pays ELCIA an additional Rs 2 per sq. ft and further payment is made for providing security services from both Central Industrial Security Force and private security service providers.” She adds that all employees of E-City pay taxes for their residences in Bangalore or areas around it. She points out that it is ELCIA members who have paid for roads, sanitation, security and all other essentials present in E-City today.
ELCIA has requested the state government to declare the area as an industrial township so that BBMP has no control over it. The association also claims that there are no residential blocks within the industrial township. A few surrounding villages prefer to be known as E-City so that they can get higher rates for their property.
“We have set up solid waste management systems, excellent roads, rain water harvesting and are in the process of setting up a sewage treatment plant. BBMP is not able to provide civic services which actually come under its current ambit. When everybody is talking of decentralised government, why do they want to take over something which is run efficiently?” asks Rama.
While M.N. Vidyashankar, principal secretary, department of commerce and industry, has indicated that E-City will be declared as an industrial township, BBMP officials are likely to lobby against it. Both BBMP and the state government are ruled by the BJP.