A Cuppa That Cheers 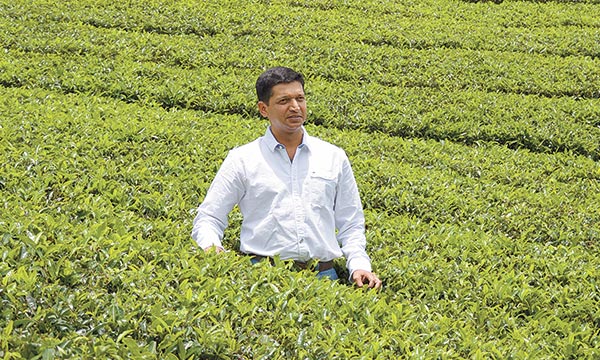 08 November, 2014
Print this article Font size -16+
S Pappa, a director on the board of a nearly Rs 300-crore associate company of Tata Global Beverages (TGBL), has not even heard of Cyrus P. Mistry, chairman of the $100-billion Tata Group, who recently completed a year in office. And Pappa, the 43-year-old employee director, has been working with Tata Group’s  associate company  — Kanan Devan Hills Plantations Company (KDHP) — for over 23 years now.  Moreover, she shares the boardroom with veteran Tata executives like P.T. Siganporia, former CEO and MD of TGBL; K. Venkataramanan, VP,  Finance, TGBL; Hamid Ashraff, former MD of Tata Coffee; and T. Damu, former VP of Indian Hotels. Pappa is oblivious to the fact that the Tatas are the majority shareholders of KDHP and were full owners until eight years ago. She has, however, heard about Ratan Tata, but is not able to recognise him. The Tata surname in Ratan Tata prompts her to make a shy and innocuous wild guess in her Trichy dialect — “Avar than namma company-yude periavaru (he is the big boss of our company).”

We cannot blame her. Unlike Mistry’s army of executives, Pappa plucks tea leaves and is a Class IV dropout. But she is seen as a legend and a hero by the 12,500 owners-cum-workers of KDHP in Munnar, in Kerala’s Idukki district. If Mistry’s globe-trotting directors work from plush offices and move around in private jets, Pappa’s workplace is in an almost inaccessible tea plantation atop Kadugumalai, 6,493 feet above sea level and next to Anamudi, South India’s highest peak. Her challenges are also different. Almost every day, wild elephants, bisons and thick fog interrupt her work. During winter, Pappa  and 34 other pluckers at this plantation under the Gundumallay tea estate have to work from 8 am to 5 pm, braving sub-zero temperatures. But the inhospitable work environment doesn’t deter their urge to be the best workers. Pappa sits on the board of KDHP based on her previous year’s performance. She plans to repeat the feat this year and retain her seat. And she is aware of the competition posed by her colleagues at six other estates.

Back-seat Driving
Has the Tata Group really left the Munnar hills forever, dissociating itself from a legacy that dates back to the Kanan Devan Hills Produce Company formed in 1888? Well, not really. Knowingly or unknowingly, KDHP executives and employees still talk about their Bombay House bosses.

And, not everyone is happy about the continued presence of the Tata Group, albeit behind the scenes. “In Munnar, the Tatas are driving the company from the back seat by forming an employees’ cooperative,”  says V.S. Achuthanandan, Kerala’s opposition leader and former chief minister. He fired a fresh salvo at the Tatas on 27 May last year, raking up some controversial land issues. In 2010, when he was chief minister, he had sent bulldozers to Munnar to raze buildings on ‘encroached’ lands. His main charge  was  that the Tatas own over 3,000 acres of illegal forest land.

Achuthanandan’s ‘back-seat driving’  comment is not without basis. The 2012-13 annual report of  Tata Global Beverages shows that KDHP as an associate company of TGBL  — one among five such companies. “During the year, TGBL increased its stake in the company to 28.52 per cent (acquiring 10.59 per cent stake) and, consequently, Kanan Devan is now an associate company,” says the report. TGBL explains that the increase in stake was on account of it facilitating the exit of some shareholders and not for strategic reasons.

In 2005, what was then Tata Tea had retained a nominal 19 per cent stake (which was dubbed as a measure to give moral support to workers), and another 7 per cent through a trust, when it ceded control to employees. The Tatas increased their stake over the years and now hold 28 per cent, besides additional 8 per cent through the KDHP Trust. “We are an independent company . They never interfered in our functioning,” says Thomas. Still, the 10-member board of KDHP is stacked with Tata veterans like Siganporia, Damu and Ashraff. Both Thomas and his predecessor T.V. Alexander were long term employees of Tata Tea. Alexander headed Tata Tea’s South Indian Plantations business and after the formation of KDHP, was appointed managing director. P.M. Srikrishnan, executive director, finance, is a strong Tata loyalist. Then, there is an employee director (Pappa) and a staff director (Mohamed Jailanie Meeran), selected every year based on their performance.
Most importantly, the Tatas are still the owners of the land — 58,742 acres in Anjanad and Kanan Devan Hills. Not many know that the land is on a 30-year lease to KDHP for an annual fee and the assets were sold to KDHP. The Tatas still own two plantations spanning 750 hectares (Pullivasal and Periakanal) and these are managed by KDHP. Besides, TGBL owns the largest instant tea factory in India at Munnar, a hundred per cent export-oriented unit.

Interestingly, KDHP no longer owns the renowned Kanan Devan brand, the rights over which were retained by TGBL. Initially the Tatas had agreed to a guaranteed buyback from KDHP, though the company was free to auction tea in the open market as well.
break-page-break
“I am very proud that we have given it (the company) to the workers and employees instead of selling it, as some other entrepreneurs would have done,” Ratan Tata had said during his visit to Munnar in November 2009, to participate in the silver jubilee celebrations of Tata Tea’s High Range School, which is still run by the Tatas. The main reason for KDHP having a participatory management structure was business compulsions. “The plantation sector was undergoing a tough period in the early 2000s, when input costs and wages were going up, global demand was dull and the industry was facing the issue of over- production, which made running plantations an unviable business,” says Thomas.

“With tea plantation becoming a non-viable activity, it was necessary for the Tatas to exit the business and focus on branded tea,” notes Deepika M.G., assistant professor with the Amrita School of Business, Bangalore, in her study ‘The Employee Buyout: Case of Tata Tea’.

Further, the quality of south Indian tea is comparatively inferior to the produce of the north, causing a slump in demand. Tata’s competitors like Hindustan Lever (HLL) were also exiting plantations. At least 19 plantations in Kerala, 30 in West Bengal and 70 in Assam had downed shutters in the early 2000s. Moreover, the Tatas were fighting a court case to establish their land ownership rights and politicians like Achuthanandan were pointing fingers at them for owning huge tracts in Munnar.

A Successful Blend
Chithra, Salaima and Shanti have been working with Tata Tea as pluckers for over two decades. Muthumariamma has been with the company for over 10 years. All of them earn an average Rs 300 a day and work from 8 am to 5 pm. Chithra’s elder son is a computer engineer and the younger one is studying hotel management. “We are all permanent staff, have quarters, free medical facilities and other incentives. It is our company and we are ready to work more, to earn more,”  they say. Their perks include some 300 shares per employee, which they will be able to encash when they retire at the age of 58. They too nurse the hope of becoming a director like Pappa. Of the Rs 10,000 that Pappa earns every month,  a bulk of it comes as incentive. “After the transfer, per-plucker productivity has increased from 30-32 kg in 2004 to 53 kg last year, whereas the industry average is 35-40 kg per plucker in south India,” says Thomas.

When the Tatas realised that the plantation business in Kerala had become unviable, they decided to experiment with the employee buyout (EBO) option. A new company, KDHP, was formed with issued, subscribed and paid-up capital of Rs 25 crore.  KDHP then extended loans to its 12,500 employees  to participate in the subscription process. Each worker was entitled to 300 shares with a face value of Rs 10. The issue raised Rs 9.04 crore against a target of Rs 8 crore. “Now the share price has appreciated over seven and half times and almost all have retained their shares,” says Thomas.  “The incentive created by the EBO model has had a positive impact on performance; the very feeling of working for their own company gives the workers immense satisfaction,” says Deepika.

“The company gave me a post which I could only dream of,” says 47-year-old T. Samuel, a former staff director and an assistant section officer with Nyamakad tea estate. He had started his career as a junior assistant with Tata Tea in 1993. Employees are also paid annual bonuses and dividends — last year, the dividend amounted to 15 per cent, or around Rs 450 per worker.

All the 23 estates were merged into seven large estates: Chundavurrai, Guderale, Gundumallay, Letchmi, Madupatty, Nullatanni and Nyamakad. The traditional top-down management structure gave way to divisional advisory committees. Two men and two women, elected from among the shareholders, represent the workers in each of these committees. A field staff is also nominated to the committee. Weekly meetings are held to discuss issues relating to labour, raw materials, machinery, etc. Similarly, separate advisory committees control operations at the factory level.

“Employees are the first to report incidents like a pest attack, which they used to ignore earlier,” says John Pereira, manager, logistics and finance. Advocate Prince, the executive in charge of industrial relations, says though trade unions are active among workers, they rarely disrupt day-to-day schedules.

Tea And Beyond
Besides improved employee productivity, Thomas attributes the turnaround to initiatives such as the foray into exports. Now, up to 21 per cent of the 25 million kg of annual production is exported to the UK, US, Middle East, Iran, Russia, Japan and Germany. The company has opened boutique stores and has launched a branded tea  by the name of  Ripple in Kerala.

KDHP is also planting high-yield clonal teas, which cost between Rs 2 lakh and Rs 4.5 lakh a hectare. “The profit margin in this business is a maximum of Rs 10-12 per kg in a good year.  Unless we look at new ways to protect margins, it will be difficult to survive,” says the managing director.

To increase profits, KDHP is looking to diversify. It is foraying into dairy products (a pilot project has been launched), cultivating aromatic plants and even venturing into hospitality. “These plans are expected to contribute Rs 7-8 crore more to profits — around 30 per cent,” says Thomas. He hopes the turnover will touch Rs 500 crore in the next 5-6 years.

Gill, the estate manager at Gundumallay, asks us to begin winding up. He is worried about our safety — he has been informed about a herd of wild elephants in the area. Besides, director Pappa is at risk of losing her post by giving the interview. She has reason to be worried, having already lost half a day’s earnings by abstaining from work. Another tea plucker from the same estate, Murugaselvi, is close on her heels in terms of productivity. A few hours’ productivity could make all the difference between becoming director again or losing out. After all, in the past seven years, KDHP has had seven different worker directors. Of them, six were women.

Kanan Devan’s participatory management experiment stands testimony to  competition and healthy rivalry doing wonders for productivity which, in turn, can spur a growth in revenues and profits.