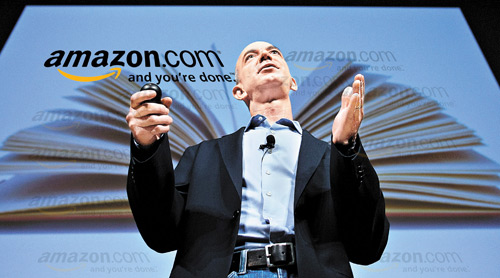 So, while all these years Amazon's lack of interest in India's nascent e-commerce market (hamstrung by broadband unavailability) was apparent, this distinction in business models has also been a deterrent. Which explains why eBay could enter India when Amazon could not. According to the Department of Industrial Policy & Promotion, e-retailing is another form of retailing, where India does not allow foreign investment in the front end. In backend, 100 per cent FDI is allowed for business-to-business ventures. While Amazon, with its fulfilment centres and direct contact with customers would violate the law, a foreign-owned, third-party marketplace where customers buy from sellers could pass through the grey area.

But with Amazon facing a 33-per cent dip in net income in the first quarter ended March 2011 in the US — which accounts for 55 per cent of its business — there is a newfound urgency to enter India by 2012. Particularly, with the panel of secretaries at the Centre approving a plan to partially open FDI in retail. Amazon is consulting market research firms such as Deloitte for a survey of the e-commerce industry and has reportedly hired Landmark group's retail chain head Madhu M. to head its India operations. It has even hired law firm Nishith Desai Associates to suggest a way out. Amazon already has three R&D centres in Bangalore, Chennai and Hyderabad, which develop software and applications.

Foreign Rules
Unless the government allows FDI in retail, Amazon is likely to break ground in India with a an eBay-like model, to begin with. "It will help them get a local advantage, local expertise and do away with regulatory issues," says Sounak Mitra, consumer specialist at market intelligence firm Mergermarket. "The secular growth of e-commerce and loosening of FDI in multi-brand retail will see an influx of large global players," says Subho Ray, president of Internet Mobile Association Of India. The $6.8-billion domestic e-commerce market is nothing to write home about when compared to China's $38.5 billion and US's $176.2 billion, but it is growing at a furious pace of 40-50 per cent per annum over the past three years. It is estimated to be a $10-billion industry by 2011 end. But about 75 per cent of this is contributed by travel and tourism, where Indian Railways' IRCTC Online, airlines' websites and aggregators such as MakeMyTrip, Yatra, Travelocity and Cleartrip rule. Amazon's entry is expected to give a fillip to the other 25 per cent comprising e-retailing.

Suvir Sujan of Nexus Venture Partners says, "Web services and marketplaces are an important component of Amazon's business. It may enter India with these services first." Says Hitesh Dhingra, founder and CEO of Letsbuy: "Electronics is a different ball game, and it takes time. In categories such as media and books, the tax structure is the same across India, and Amazon already has an international catalogue, and hence it makes sense for it to start with books and gradually look into other products." Experts, however, believe Amazon will be constrained if it cannot roll out the full suite, including the supply chain, fulfilment centres and the logistics. "It took us two years to get the infrastructure in place, to build relations with distributors and we are still building it. By the time any global player gets in, we will get deeper into the category," says Dhingra. "To set up own warehouses and start billing directly to customers, Amazon has to wait for the FDI approval." But there will not be any problem for the marketplace business, which is more like commissioning; invoicing has to be done by the seller, not by Amazon as eBay does. "You can procure anything from here, but cannot sell it in the retail market," says Mitra.

In the UK, Germany and China Amazon has chosen acquisition as its entry strategy. It bought online bookshop Telebuch in Germany, Bookpages in the UK and e-retailer Joyo in China. Amazon could either look into buying a B2B player or tie up with a B2C firm such as Flipkart. But Flipkart says it is in no discussions with Amazon. "But I am not accepting or denying what has happened in the past," says Ravi Vora, head of marketing at Flipkart. But despite Amazon keeping its strategy under wraps, the word in the market is not whether Amazon is coming to India, but how and when it will enter.