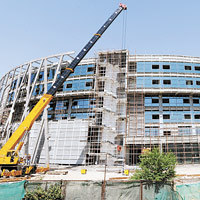 08 November, 2014
Print this article Font size -16+
A consensus between warring political parties may see the contentious Land Acquisition, Rehabilitation and Resettlement Bill through the current Parliament session. The urgency to replace the 119-year-old Act with something more equitable has overshadowed power play. However, these glimpses of sanity may still be overrun by the all-out war that has broken out on the joint parliamentary committee’s report on the 2G scam. The Bill seeks to balance farmers’ demands with the need for land for industry and infrastructure. Land for ‘public purpose’ has been defined, and acquisition by private projects requires the consent of more than 80 per cent of stakeholders.

Also, buyers will have to pay twice the market value for urban land, and four times for rural land. Finally, there seems to be some hope that the knotty issues around land acquisition can be resolved.
Simultaneously, the stiff norms on special economic zones (SEZ) are being eased. The Centre is moving towards reducing the requirement of 10 hectares of minimum land area for setting up IT/IT-enabled services SEZs. “The exit policy will ensure that SEZ developers in trouble can exit projects without the SEZs having to suffer,” says Sanjay Dutt, MD of broking house Cushman & Wakefield.
—Gurbir Singh
Home Truths
Sometimes, when numbers don’t add up, you divide them. A case in point is the share of housing in households’ net worth, currently clubbed with commercial realty by the Central Statistics Office.

Reserve Bank of India executive director Deepak Mohanty feels it’s time a distinct component — that of households’ investment in residential property — is carved out to get a better idea of the contribution of housing to a
household’s net worth. It will also help  calibrate policy to spur investment — at the household and corporate levels, and home in on asset-bubble drivers, something that former RBI governor Y.V. Reddy was interested in.
— Raghu Mohan
Back To Basics?
So how should telecom operators get spectrum in the future? That’s the big question a Department of Telecommunications (DoT) panel is looking to address after two rounds of spectrum auctions in FY13 yielded less than a third of the targeted Rs 40,000 crore for the Centre. In September 2012, the Supreme Court said that auction is not the only means for selling spectrum, though there should be price discovery. The DoT panel believes it can go back to allocation of spectrum to operators.

Zero profits and regulations in the sector are keeping private equity players out of the game. But if the money-guzzling sector does not attract investments soon, it will be an end to a journey that has just begun.
— Shrutika Verma
Take A Sip, Slow Down, And Relax!
After fizzy energy drinks, what next? Slowdown sodas, of course. Melatonin, valerian root, rose hips and passion flower are the merry mixers that relax when laced with soda. And they’re being commercially marketed in the US as ‘anti-energy’ drinks. Unwind, Drank and Marley’s Mellow are some offering “relaxation in a can”. But at the recent Indian Beverage Association meeting in Delhi, food law expert Andreas Kadi flagged the disquieting trend of anti-energy drinks. “If you need relaxation, why not tea,” he asked!
— Chitra Narayanan
The King’s Dead. Long Live The King
An obit accidently published by Reuters said, “George Soros, who died XXX at age XXX, was a predatory and hugely successful financier and investor...” This faux pas puts the business magnate in the league of many other dignitaries who have been prematurely declared dead by the media, such as Steve Jobs, Mark Twain, Whitney  Houston, and Alfred Nobel, whose 1888 obits called him a merchant of death. In 1895, he instituted the Nobel Prize — a year before his death. Maybe others can use these “errors” to decide what legacy to leave behind.
— Shruti Chakraborty