A Champion Of The People 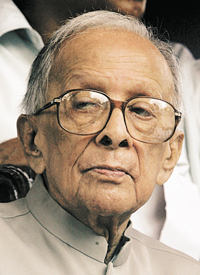 A colossus has fallen. Not unsurprisingly, the response to the demise of Jyoti Basu —  the doyen of the Communist and the Left movement in the country — has been overwhelming. Friends and foes, fans and critics have all joined to mourn his death. To some who saw him merely as a regional leader and as the longest serving Chief Minister of a state, it has been difficult to comprehend the national significance of his contribution.

The end of a journey that spans more than seven decades and the three distinct strands that distinguish it is perhaps with no parallel in our political life and history — particularly in the post-Independence period.
Jyoti Basu was a freedom fighter beginning his association with the struggle for emancipating the country in England. He came back and plunged into the freedom struggle as a communist and was engaged right away in the work of organising the workers. The second strand was his role in the legislature showing hands on how parliamentary space can be used by the communists to communicate and expand the space for articulating the concerns of the workers, peasants and other teeming millions. To be able to be elected in 1946 in the wake of sweeping slander that “communists have betrayed the cause of freedom” and to sustain successfully that legislative presence as one of the most respected and feared opposition leaders in the Bengal assembly for 21 years was an unprecedented achievement. And then the coalition maker.
After two short stints as deputy chief minister, he emerged as the undisputed leader of the Left Front and continued to be the chief minister from 1977 till he voluntarily relinquished office in 2000. The integration of these three periods was combined in his multifaceted role of a communist leader, a patriot and a visionary, an administrator and above all, a champion of the people.
His association with the freedom movement and his initial intellectual grounding in the best democratic traditions made him a front ranking crusader for a modern, forward-looking independent Indian republic. His association with the working class movement during the trouble-torn and communally sensitive Bengal in the 1940s imbibed in him a deeply engrained antipathy towards forces of communalism and division. That grounding resulted in the strong strand of secularism which distinguished his political vision and approach. The firmness that characterised his attitude towards communal strife that highlighted his response to anti-Sikh riots in 1984 or to communal polarisation in the wake of destruction of Babri Masjid, became a symbol of the Left, democratic and secular forces in the country.
Basu was in the forefront of struggle for sustaining and expanding democracy — not merely in the formal sense, but to exercise it for securing the rights of workers, peasants etc. In other words, not just in its political form but in its economic content. It is because of this that he had to face — as a leader and as an embodiment of the movement that he led — the worst physical repression.
His understanding of history and sense of democracy premised his distinct sense of the importance of unity and integrity — with equal opportunity for different regions. His articulation of regional aspirations was not a divisive one. He maintained “without strong states, there cannot be a strong union, a strong India”. His espousal of the regional cause was imbued with a deep sense of patriotism.
But finally he was the leader of the people — the poor, the underprivileged, the downtrodden. Today, when his death is being mourned by everybody including those who despised him for his role in empowering these ‘wretched of the earth’, he is being attacked for having destroyed West Bengal and its development prospects. But the 27 years that he led the government in Bengal has not just witnessed an unprecedented redistribution of rural land resource in favour of the rural poor,  but has also led to an unprecedented growth in agricultural production and productivity. 1.07 million acres of land distributed among 2.64 million landless peasants of whom 56 per cent were SCs and STs — with the current prices would mean more than Rs 20,000 crore in the hands of the rural poor. In the case of statutorily protecting the rights of the sharecroppers there is  a similar story. With such incentives, it would have been surprising if agricultural productivity had not gone up. And that is what has happened. Throughout the 1980s and 1990s, Bengal catapulted itself to one of the highest state GDP achieving states and an oasis in a landscape dotted with increasing farmers suicides. It is a state with a resurgent rural economy ready to embrace and sustain development of industries.
Basu was the embodiment of a movement, of a collective consciousness. He believed it is people who make history. It is he who believed that people do not remember individuals. His legacy will endure, and collectively people will ensure that the principles and values he represented will continue.
The author is a central committee member of the Communist Party of India (Marxist)
(This story was published in Businessworld Issue Dated 01-02-2010)
Tags assigned to this article:
magazine jyoti basu obituary nilotpal basu