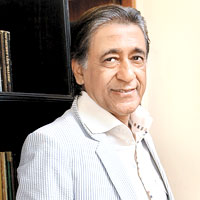 
Against this backdrop when Business India went behind the corporate veil and began reporting on the productive work the captains and foot-soldiers of private sector industry were doing despite having one hand tied behind their backs by the neta-babu conspiracy hell-bent upon extracting maximum rents and speed money from them, it immediately
became a big publishing phenomenon and success.

Unfortunately, this didn't go down well with my publisher Ashok Advani who felt that the editor was more celebrated than he was. Which is as it should have been given that I was writing all the lead stories and re-writing the rest of the magazine in those days when there was no pool of business writers to draw upon. Therefore, after bringing out 66 issues of Business India and writing over 50 new genre cover stories, I put in my papers to his great delight which he celebrated by denying me my gratuity dues of Rs 9,000 on a legal quibble. Quite obviously he didn't appreciate that I had built him a multi-million rupee brand from which he still derives — a precarious by all accounts — living.

But by now I had discovered a new mission in life to turn public opinion against neta-babu socialism and destroy the foundations of licence-permit-quota raj which had chained the Indian economy to the Hindu rate (3.5 per cent) of annual growth for over 30 years and torpedoed the modest material aspirations of an entire generation of free India's children.

After futile discussions with industrialist Jayant Malhoutra and India Today publisher Aroon Purie, I found a like-minded publisher in Aveek Sarkar, chief executive of the Kolkata-based Ananda Bazar Patrika Group with whom I clinched the deal to launch BusinessWorld (as it was known then) during a 40-minute drive to Bombay airport. I appreciated Aveek's quick decision making and risk-taking skills and (subsequently) his hands-off style of letting editors of various publications of the ABP Group do their own thing.

As implicit in the name and style of BusinessWorld, it was conceptualised as wider in span and coverage and included over six pages of business news from around the world every fortnight and prompted managers within the then insular and autarkic Indian industry enslaved by ‘Indian economics' — a gobbledygook amalgam of Marxist and pious socialist nostrums — aware of the breadth and sophistication of business and industry in industrial western economies. With the resources of the ABP Group, BusinessWorld entered into a content sharing agreement with the Financial Times, London and inter alia purchased the right to exclusively feature a globally syndicated monthly column written by Lee Iacocca, who rescued Chrysler Motors from the brink of disaster to emerge as a globally acclaimed business leader.

I served as editor of BusinessWorld for seven years (1981-87) during which — together with a strong and reliable country-wide team — I produced 166 issues of this then fortnightly magazine, and wrote over 100 cover stories which I believe transformed the national mindset about the character and potential of private sector business and industry. Looking back in retrospect, I believe it was the missionaries of BusinessWorld (and Business India) who deserve a greater share of the credit for the 1991 liberalisation and deregulation of the Indian economy — than Dr Manmohan Singh and his over-hyped lieutenant Montek Singh Ahluwalia who were enthusiastic executives, if not architects, of licence-permit-quota raj for several decades and who were at the time earning unmerited dollar fortunes in the World Bank and Asian Development Bank.

Since I was driven by a mission and not just doing a job, my years in BusinessWorld were fulfilling, particularly as I had full autonomy and unstinted support of the head office in Calcutta. But one promise which Aveek failed to keep was to get BusinessWorld — which was solidly in the black — suitable office premises. Right to the end we shared an open-plan office with Business Standard, occupying a cramped narrow corridor with the editor lodged under a protruding window air-conditioner. Having hit my head on the air-conditioner too many times, I put in my resignation in September 1987. It was accepted without any offer of a severance package. Admittedly, I didn't ask for it, but considering I had built the ABP Group a million-dollar brand from ground-up, it should have been offered. Well never mind, that's capitalism Indian-style.


One of the reasons I quit BusinessWorld was to write the first great Indian business novel. But unfortunately David Davidar, who had mysteriously been appointed CEO of Penguin Books, rejected Succession Derby — to this day the only authentic business novel written in the subcontinent. Following a few months of unemployment, I was appointed editor of Debonair, India's answer to Playboy in 1988. I lasted only 12 months in that ostensibly coveted job. My objective was to transform this raunchy publication into a more upscale leisure, lifestyle and manners and morals monthly. But Sushil Somani, the publisher, wasn't quite in sync with me. The last straw was when I decided to feature a black girl as the nude centrefold of Debonair. Over the weekend, Sushil went to the press and replaced the centrefold with a pale, plump Central Asian-looking stereotype much beloved of Bollywood producers. Naturally, I was obliged to put in my papers.

Since then, after a not entirely successful stint in the Datamatics Group (1989-97), I believe I have found my metier as the publisher-editor of EducationWorld, a Bangalore-based monthly magazine (estd. 1999). Promoted with the mission "to build the pressure of public opinion to make education the No 1 item on the national agenda", this globally unique publication took almost a decade to get off the ground and required a meltdown of all personal assets including home and inherited farm before it took wing in the nick of time.

In the process, I discovered the ugly face of Indian capitalism, which I had perhaps over-painted in my earlier avatars. Surprisingly billionaire captains of industry blanched at the prospect of investing small sums as venture capital in the holding company of EducationWorld or helping out with tax-deductible advertising. Despite the fact that industry is the largest beneficiary of a skilled and educated workforce, very few so-called visionary corporate leaders discern the need to become involved with the cause of upgrading and improving the country's crumbling education system. Finally after suffering the insolence of office, proud man's contumely, etc. I was obliged to raise top-up capital for my new venture in the US where ironically, there's greater appreciation of my track record and potential.

Now with little time or inclination for India Inc. and wholly engaged in trying to a get a fair deal for the world's largest child population continuously denied meaningful education by the neta-babu conspiracy which has migrated into Indian education, I nevertheless have some advice for myopic captains and leaders of Indian industry. As the Mahatma (Gandhi) often reiterated, in developing countries, industry and business leaders have a great duty of care towards weak and vulnerable members of society, especially towards children, the inheritors of the country. Please note quality education for all children is a necessary pre-condition of sustained industry and economic growth. Continuous neglect of this vital social obligation is tantamount to cutting the ground beneath your feet. If you listen carefully, you'll hear the sound of approaching thunder in the distance.

Ignore it at your own peril.

Dilip Thakore is the Bangalore-based publisher-editor of EducationWorld