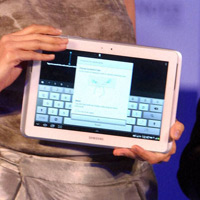 08 November, 2014
Print this article Font size -16+
Samsung’s Galaxy Note, the famous “phabet” was quite a hit in India. For a gadget that immediately caused many to laugh at its in-between size making it a phone that was too big and a tablet that was too small, the 5.3 inch Note went on to sell over 10 million units – and will probably continue to do so.

It was when you held it in your hands that the penny dropped. It had a way of feeling just right, and its slim little stylus, the S-Pen, added a layer of functionality for anyone who wanted it. A lot of people also poked fun at the stylus, saying that it was rewinding to an earlier time in tech history, but even that didn’t put a dent in its sales. It had obviously hit some sort of sweet spot with its size and specs.

With that sort of success, it was inevitable that there would be another Note. Or several, in fact. And finally there was one. But it doesn’t quite come from the phabet family, except for the S-Pen. The successor to the 5.3 inch Note is yet to reveal itself.

Today, about two weeks after the launch in the US and UK, Samsung debuted the bigger Note, the 10.1, in India. It’s known as the Galaxy Note 800 and the tech media got a quick look at it. Pick it up and it immediately feels light (more so than the third generation iPad for sure) and extremely “plastic-ky.” Not many people can understand Samsung’s passion for plastic that doesn’t feel premium, and with 10.1 inches of it, it’s noticeable in much the same way as it is on the Galaxy S3 smartphone. Others have shown that plastic can be done more elegantly, but Samsung seems to have an attachment to the new shiny variety. For devices that sell readily in any case, one can’t help wondering if maybe they would fly off the shelves even faster if only they weren’t so plastic down to the soul.

Well, that white Note 800 actually looks like a giant Galaxy S3 and opens to the same watery blue theme, enhancing the sameness. The screen looked bright and vibrant but a closer look will be needed to see whether the image remains sharp when you use it. The overall look is for a moment also reminiscent of the iPad but perhaps that’s best left to the courts to decide. Samsung is currently fighting it out in court with Apple who says its arch rival has blatantly lifted off design and other elements in what is an infringement of copyright. In any case, no tablet outside of the very low cost bracket can hope to come into the market without everyone wondering whether it will be a thorn in the side of the still-dominant iPad.

The Note 800 isn’t a budget tab at all but costs Rs.39,990 for a 16GB version. The user can expand it to 32SB with the micro SD slot. Other specs include 1.4GHz quad-core Exnyos processor, 2GB of RAM and there’s 1280x800p resolution on the display. The battery is a 7000 mAh but how many hours it lasts one will have to see. The camera, the results of which looked surprisingly clear and sharp, is a 5-megapixel primary and 1.9-megapixel secondary.

Samsung is really pushing the addition of the little S-Pen that is tucked into the side of the tablet, working with a Waccom digitizer on the device. They are claiming that it the S-Pen is what makes the tablet super special, allowing artists, fashion designers, architects etc to really unleash their creativity. They also expect the Note 800 to be just what students want. The S-Pen is pressure sensitive for some uses, but as much good as using a finger in others. There are not enough S-Pen optimized apps to make use of the fine control of the stylus. Six of the apps on the tablet allow it to work in a split-screen mode.

The Note 800 runs on Ice Cream Sandwich and Samsung’s own TouchWhiz interface and as is typical, there can be an interminable wait for the upgrade to Jelly Bean, the newest Android version.

The Note 800 not only may have a tough time standing up against the iPad but will compete against some of its own tablets, including the 10.1 minus an S-Pen.
Tags assigned to this article:
mala bhargava exclusive to web more 4 samsung ipad gadget 10.1 galaxy note 800 s-pen