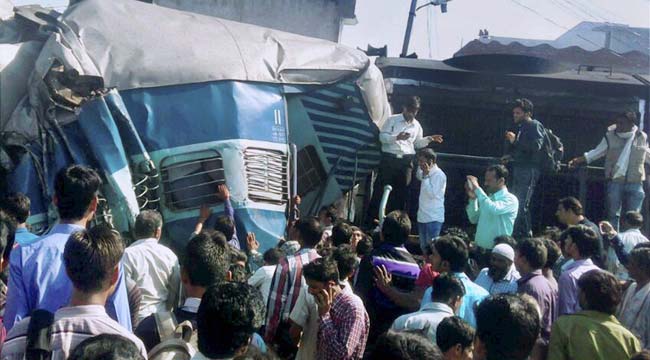 31 March, 2015
Print this article Font size -16+
At least 31 people were killed and around 150 others injured on Friday (20 March) when the engine and two adjoining coaches of the Dehradun-Varanasi Janta Express derailed near Bachrawan Railway Station in Rae Bareilly district.

"The toll has gone up to 31," Uttar Pradesh Health Minister Ahmed Hassan told PTI over phone. Officials feared that the casualties could go up.

Though the cause of the derailment was not immediately known, officials at the scene of the mishap said the train apparently overshot a signal because of a possible brake failure before coming off the rails. The scene of the accident that occured at 9.10 AM was some 50 km from the state capital Lucknow.

One of the coaches was a general compartment, which lay mangled along the tracks as rescuers used gas cutters to rip apart the wreckage to find trapped people. Most of the casualties were from this coach, officials said.

The other was a guard compartment which is likely to have been vacant. If not for the vacant coach, the number of casualties would have been higher, the officials said.

The locomotive driver apparently overshot the signal and as a result, the engine and two adjoining coaches derailed, Railway Spokesperson Anil Saxena said in Delhi.

As soon as the news of the accident spread, people from nearby villages rushed to the spot to help in rescue and relief operations even before authorities arrived at the spot.

The accident spot presented a devastating sight with one of the bogies reduced to a mangle of steel.

There was some anxious moments in the area as furious locals raised slogans against the administration and railway authorities, saying the rescuers took a long time to reach the spot.

Ambulances carrying teams of doctors were rushed to the accident site to help passengers who were screaming in pain, eyewitnesses said.

Train movement on the Lucknow-Varanasi section of the Northern Railway has been disrupted due to the accident.

Chief Minister Akhilesh Yadav announced a compensation of Rs 2 lakh to the kin of those killed and Rs 50,000 for the injured.
The spot of the accident presented a devastating sight with one of the bogies reduced to a mangle of steel.
Ambulances carrying teams of doctors were rushed to the accident site to help passengers screaming in pain, eye witnesses said, adding gas cutters were being arranged to cut open the crushed compartments to pull out passengers.
Train movement on the Lucknow-Varanasi section of the Northern Railway has been disrupted due to the accident.
The injured passengers have been rushed to the district hospital. Rescue teams from Lucknow and Rae Bareli rushed to the spot and cranes have been deployed to lift the bogies.
Chief Minister Akhilesh Yadav also announced an ex-gratia payment of Rs two lakh to the next of kin of the deceased and Rs 50,000 to the injured.
(PTI)
Tags assigned to this article:
news 3 transport indian railways uttar pradesh akhilesh yadav lucknow suresh prabhu ak mittal