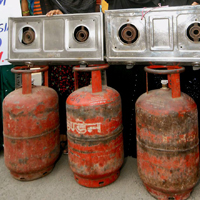 08 November, 2014
Print this article Font size -16+
The government said on September 28 it has not banned issue of fresh cooking gas (LPG) connections and there was only a temporary three-week hiatus in new allotments pending elimination of duplicate connections.

State-owned oil firms are carrying out a massive nationwide exercise to eliminate users having multiple connections at the same addresses. Pending this, new allotments are on hold, an official said.

"When a customer applies for a new LPG connection, the gas distribution agency after scrutiny sends an intimation letter informing of the allotment being made. In all cases where such intimation letter has already been sent, new connections will be issued. That is a commitment," he said.

While new applications will continue to be accepted, the intimation or allotment letters would not be issued just yet.

"We are updating software at company end as well as at the gas agency end to take into account the recent decision of the government to restrict supply of subsidised LPG cylinders to six per household in a year. This will take minimum of three weeks," he said.

Besides, the oil firms are also eliminating duplicate connections -- only one LPG connection on one address is allowed and the rest are being disconnected.

"All this is taking some time and in the meanwhile oil companies will not issue allotment letters to new consumers," he said adding the entire process would take 20-25 days.

The Oil Ministry also issued a press statement saying "there is no ban on release of new LPG connections".

"To ensure that subsidised domestic cylinders are available to genuine customers, new connection requests will be accepted by all LPG distributors...," it said.

The connections will be released on completion of KYC (Know Your Customer) formalities and de-duplication of the applicant across all the three oil companies to ensure that multiple connections are not released, the statement said.

"These cylinders are subsidised by the Government up to a limit of 6 domestic cylinders per annum with effect from September 14, 2012," it said.