2G: Niira Radia May Appear In Court On Dec 5 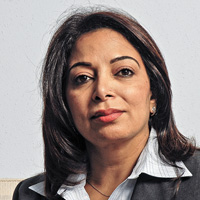 08 November, 2014
Print this article Font size -16+
Former corporate lobbyist Niira Radia, a key prosecution witness in the 2G spectrum allocation scam, is likely to appear on December 5 before a Delhi court to depose in the case.

The CBI has submitted before Special CBI Judge O P Saini its list of prosecution witnesses to be called for recording of their statements before the court and Radia's evidence is slated for December 5 and 6.

The CBI, in its charge sheet filed on April 2 last year against former Telecom Minister A Raja and others, had lined up Radia as a prosecution witness in the case.

Radia's statement assumes significance as she, in her statement recorded during the probe under section 161 of the CrPC (dealing with examination of witnesses) before CBI, had said that Swan Telecom Pvt Ltd, facing trial in the 2G case, was not "eligible" to get the Unified Access Service (UAS) Licences.

"Regarding M/s Swan Telecom, which was the only applicant to get the spectrum in Delhi circle, I would like to state that M/s Swan Telecom as applicant was not even eligible for getting a UAS licence, in view of the cross holding clause.

"To the best of my understanding it was controlled entirely by M/s Reliance Communications," Radia had told CBI in her statement recorded by the agency on December 21, 2010.

The CBI, in its charge sheet, had alleged that Reliance Telecom Ltd (RTL), an accused in the case, used Swan Telecom, an ineligible firm, as its front company to get licences and the costly radio waves.

Swan Telecom and its promoters Shahid Usman Balwa and Vinod Goenka, RTL and three top executives of Reliance ADAG -- Gautam Doshi, Surendra Pipara and Hari Nair, along with others, are facing trial for their alleged roles in the case.

During the probe into the case, Radia had told CBI that she had talked to DMK MP Kanimozhi, also an accused in the 2G case, after the 2009 General elections and had discussed about the likely candidature from her party for the Cabinet.

In her statement recorded by the CBI on January 29 last year, Radia had refuted the allegation that she had approached Kanimozhi to get Telecom Ministry for Raja in the Cabinet.

"During the discussion with Kanimozhi when she was in Delhi, we discussed about the likely candidature from DMK for the Cabinet. As I remember, A Raja was not interested in telecom ministry.

"Neither I approached Kanimozhi for approaching to get A Raja the ministry of telecom nor I was that competent for that big task," she had told the agency.

She had also told the agency that former Telecom Minister Dayanidhi Maran had "created a lot of problems to Tata Group" and thus, she was concerned about his portfolio as Tatas were the client of her PR agency.