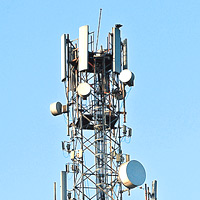 08 November, 2014
Print this article Font size -16+
The much talked about 2G mobile phone spectrum auction ended in a damp squib on 14 November with half of the airwaves on offer remaining unsold and government getting just about one-third of the targeted revenue. The tepid response to the auction will also mean that the government will find it difficult to meet the revised fiscal deficit target of 5.3 per cent of GDP.
The scant interest in the 2G auction was attributed to high base price.
The spectacular flop of the 2G spectrum auction also raises questions over the presumptive loss of Rs 1.76 lakh crore cited by the Comptroller and Auditor General of India (CAG) in 2010 for giving away spectrum at rates fixed in 2001. The 2012 2G auction rates were fixed in accordance with the price garnered in the 3G auction as the benchmark.
According to preliminary estimates, leave aside the Rs 40,000-crore target, the government received bids worth a "much-less" than Rs 10,000 crore (Rs 9,800 crore) in an auction that ended in two days, a far cry from the 35-day bidding for the 3G spectrum in 2010 that got it Rs 67,719 crore.
Further, as the government has promised to refund the licence free paid in 2008, the net gain to the exchequer may be almost nil.
The government was targeting Rs 28,000 crore from the sale of 2G spectrum in the GSM band. The CDMA sale was over before it started as the two contenders withdrew form the auction.
Videocon and Idea won spectrum in 7 circles while Telenor got spectrum in 4 circles. Airtel and Vodafone won spectrum in one circle each. None of the five companies in fray bid for a pan-India spectrum for which the reserve price was set at Rs 14,000 crore for 5 Mhz of airwaves.
Metro cities of Delhi and Mumbai, which accounted for 40 per cent of the base price of Rs 14,000 crore for 5 MHz of 2G spectrum, drew no bids at all.
Bids in most of the circles were around the base price with the exception of Uttar Pradesh East and West besides Bihar. In fact, the auction got extended into the second day only on back of interest in Bihar circle.
Bihar Drives Demand
Earlier, the second day of auction had started at 0900 hours on 14 November on the back of demand for spectrum in the Bihar telelcom circle.
As per the data made public, the last round of Day 1 (on November 12) saw bids for spectrum only in Bihar circle. Or else it would have ended on 12 November itself.
Five telecom operators -- Bharti Airtel, Vodafone, Telenor-promoted Telewings, Videocon and Idea Cellular -- had applied for participating in the auctions.
The bidding for spectrum in the 1800MHz band was muted on the Day One as expected. At the end of the first day of bidding, seven rounds were completed and the government received bids worth Rs 9,280 crore only. That is less than the amount that a single nationwide operator would need to pay at  Rs 14,000 crore as the base price.
Of the 176 slots that were on offer, there was demand for only 98 slots. The auction will continue on 14 November.
There was fight for spectrum in UP East circle, which has 11 slots (of 1.25MHz each) on offer. Telewings (the new entity of Telenor), Videocon Telecommunications and Idea Cellular are in the fray for spectrum in the circle.
New players or companies, whose telecom permits were impacted by Supreme Court judgement that cancelled 122 licences, are required to bid for minimum of four blocks.
Existing players can bid for maximum of two blocks.
The government has also assured to provide additional blocks of spectrum in all circles, except Delhi and Mumbai, if required by new players or companies for them to qualify in the auction.
The government had put on auction a substantial part of the spectrum that was freed from Supreme Court in February this year cancelling 122 mobile permits issued by the then Telecom Minister A Raja to nine telecom players in 2008.
(With input from PTI)
Tags assigned to this article:
top 1 airtel idea cellular vodafone mumbai telecom operators karnataka videocon spectrum auction mobile phone
sentifi.com