21.4 pc sero-prevalence among population of over 18 years: ICMR

21.4 pc sero-prevalence among population of over 18 years: ICMR

New Delhi [India], February 4 (ANI): The sero-prevalence in the population above the age of 18 years was 21.4 per cent in the third sero-survey conducted from December 17, 2020 to January 8, 2021, said the Indian Council of Medical Research (ICMR) on Thursday.
During a press conference, Balram Bhargava, DG ICMR said that a total of 7,171 healthcare workers were included among the 28,589 individuals in the third sero-survey.
"The third sero-survey was done from December 17, 2020, to January 8, 2021. A general population of 28,589 individuals were included and another group of 7,171 healthcare workers were also included... Above the age of 18 years the sero-prevalance was 21.4 per cent. Sero-prevalence among children aged 10-17 years was 25.3 per cent," Bhargava said.
"Amongst healthcare workers, sero-prevalence was highest overall with 25.7 per cent. Statistically, it was not different between doctors, nurses, field staff, and paramedics, but it was highest among doctors and nurses with 26.6 per cent as against the administrative staff which was 24.9 per cent. IgG antibody against S1 Receptor Binding Domain was detected," he added.
The sero-prevalence means the presence of antibodies against COVID-19 in the population.
He said that the survey was conducted in the same 700 villages/wards.
"A total of 70 districts from 21 States selected during the 1st and 2nd rounds. 100 Healthcare Workers (HCWs) per district, working in Taluk hospitals/CHCs/PHCs (all HCWs from selected health facilities)," he said.
According to the survey, a large proportion still remains vulnerable hence prevention is the key and vaccines are necessary, Bhargava said.
The overall findings of the survey are as follows:-- 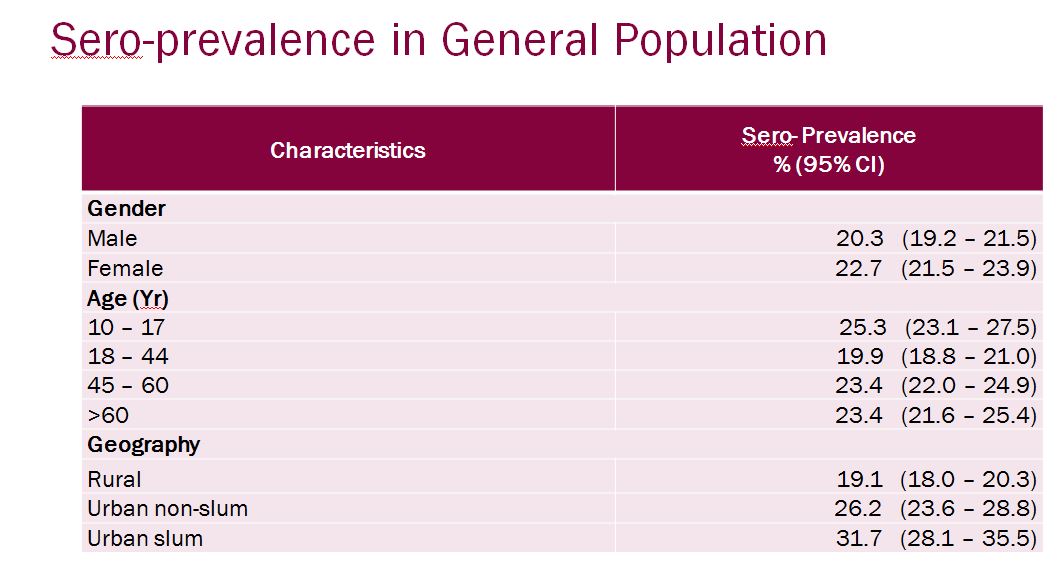 According to the Indian Council of Medical Research (ICMR), sero-surveys help to understand the proportion of the population exposed to SARS-CoV-2 infection including asymptomatic individuals. Depending upon the level of sero-prevalence of infection, appropriate public health interventions can be planned and implemented for prevention and control of the disease. (ANI)