2012 A Tumultuous Year For Indian Aviation 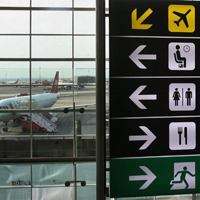 08 November, 2014
Print this article Font size -16+
Indian aviation industry witnessed tumultuous developments in 2012 with the grounding of Kingfisher Airlines and financial trouble hitting Air India and other carriers even as a prestigious airport project contract bagged by a leading Indian infra firm was terminated by the Maldives government.

To provide some succour to the ailing Indian carriers, the government came up with some pro-industry policies like allowing foreign airlines to invest in their Indian counterparts, but to no avail.

Even steps to check high air fares did not have the desired impact and affordable ticket prices remained a distant dream. This also led to a fall in domestic air traffic, with the passengers carried by Indian airlines dropping 2.94 per cent between January-November compared to 2011.

A negative development was the "unilateral" termination of the prestigious Male airport expansion and modernisation project contract awarded to major infrastructure firm GMR, by the Maldives government. The contract was awarded to the Indian company by the previous regime there in 2010.

The FDI liberalisation move saw no takers, though there were hopes that 2013 would witness some interested foreign airlines picking up equity in Indian carriers, some of whom were in talks on the issue.

Commenting on the FDI decision, IATA chief Tony Tyler said, "As long as high taxes prevail, high airport costs and high cost of operations exist, you are not going to get a lot of people to invest in airlines."

While welcoming the move, he said, "Unless conditions in India are improved for the airlines, you are not going to see a flood of foreign carriers coming into the industry. Foreign capital needs a return just as anywhere else."

The year also saw the government coming to the aid of Air India by promising additional equity of Rs 30,231 crore in tranches between 2012 and 2021 provided the airline fulfils the tasks set out for it in a time-bound manner as per its Turnaround and Financial Restructuring Plans.

This led the airline to declare a lockout, grounding its entire operations. Soon thereafter, aviation regulator DGCA suspended its flying permit, which in any case expires on December 31.

The Vijay Mallya-owned carrier has now submitted an interim revival plan to resume limited operations from 2013.

But it can do so only 6-8 weeks after DGCA allows it to fly again due to refresher training and medical tests of its crew.

The problems which led to the closure of Kingfisher Airlines cannot be seen as teething troubles or natural pains of an emerging sunrise sector but were more systemic in nature, industry sources said while referring to other carriers which suffered losses but carried on flying.

High taxes on jet fuel was a major concern for the entire industry which led the government to allow the carriers to directly import the item. But problems of infrastructure like storage and transportation of jet fuel to airports, which are controlled by the oil marketing firms, remained to be solved.

To check high fares, government decided to do away with the airport development fee being charged from passengers coming to and going out of Delhi and Mumbai airports from January and asking Airports Authority of India not to charge it at Kolkata and Chennai airports being developed by it.

The AAI was also asked to infuse more equity in the joint ventures operating the Delhi and Mumbai airports.

Air India also inducted the first few of the 27 Boeing 787 Dreamliners and put them into service in select domestic and international routes.

With these next-generation planes, the national carrier announced launching of new flights in its bid to expand its route network and resuming closed down domestic services, aiming to corner more passenger traffic.

A series of initiatives in this regard saw improvements in its passenger loads, revenues and some stemming of its losses.