New Delhi [India], August 11 (ANI): 'Dil Chahta Hai' -- the comedy-romantic film which has gained cult status -- completed 19 years since its release on Monday.
As the movie hit the milestone mark, the director of the flick, Farhan Akhtar, took a trip down the memory lane.
He shared illustrational pictures of the characters and some of their stand-out dialogues, which are still enjoyed by movie enthusiasts. 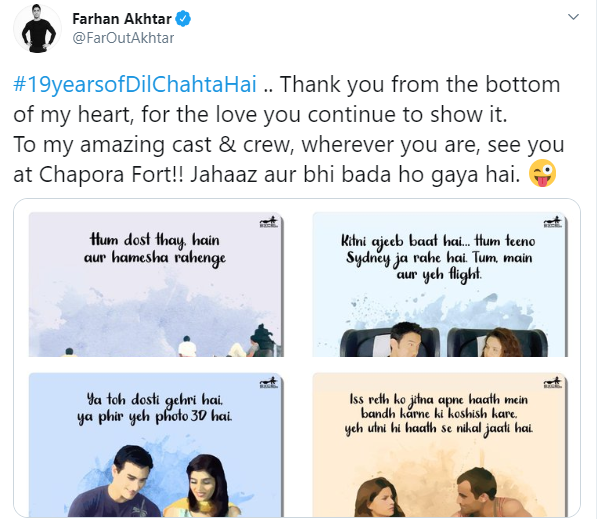 Akhtar also thanked the fans for continuing to show their love for the movie.
#19yearsofDilChahtaHai... Thank you from the bottom of my heart, for the love you continue to show it. To my amazing cast & crew, wherever you are, see you at Chapora Fort!! Jahaaz aur bhi bada ho gaya hai, the 46-year-old actor tweeted.
The movie, released in 2001, boasts an ensemble cast including Aamir Khan, Saif Ali Khan and Akshaye Khanna as the main trio.
Preity Zinta, Sonali Kulkarni, and Dimple Kapadia also play significant roles in the movie.
The film was applauded for its strong storyline and had won the National Film Award for Best Feature Film in Hindi.
The movie, mostly shot in urban Mumbai and Australia, follows the journey of three best friends who get separated after college. It is about how these three friends discover love and the problems they encounter during their journey. (ANI)