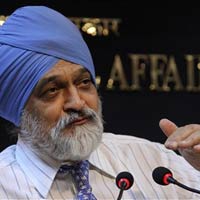 08 November, 2014
Print this article Font size -16+
Faced with sluggish economy, Planning Commission may scale down the annual average growth rate target to 7 per cent from 8 per cent envisaged in the 12th Plan (2012-17) in mid-term review of the five-year policy.

The Commission, according to sources, has already started spadework on the mid-term review of the 12th Five Year Plan and in view of slow recovery, the economic growth target may be tweaked to 7 per cent.

Plan panel Deputy Chairman Montek Singh Ahluwalia had asked for inputs from states for the mid-term review during the recent annual plan discussions with their Chief Ministers and other officials, a source said.

The Commission is already half way through with the annual Plan outlay discussion and it has already approved such outlays for over 15 states so far.

As per the CSO's advance estimates, the Indian economy would grow by 5 per cent in the 2012-13, the first year of 12th Five year Plan. Besides, the government is expecting economic growth of around 6.1 to 6.7 per cent this fiscal -- the second year of the five year policy period.

A senior official of the Commission said: "With presumption of 5 per cent economic growth in 2012-13 and 6 per cent in 2013-14, Indian economy would have to grow by 9.7 per cent in the remaining three years 12th Plan. That seems not feasible."

"However if the economic growth target is kept at 7 per cent in the 12th Plan, an average growth of 8 per cent per annum in the remaining three years is required. That could be possible," he added.

The Commission has earlier also scaled down the annual average growth rate of 9 per cent envisaged in the 11th Plan to 8.1 per cent in view of the global economic meltdown that began in 2008.

According to official estimates, India achieved an economic growth rate of around 8% during the 11th Five Year Plan period (2007-12).