‘Would Love To Work With Bollywood’ 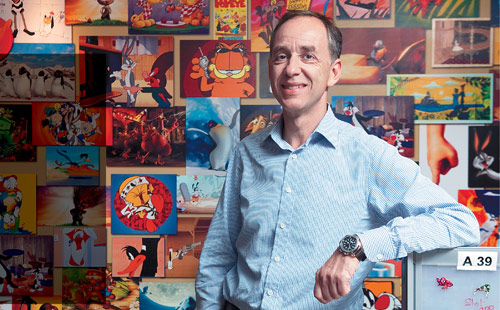 08 November, 2014
Print this article Font size -16+
Every time you were dazzled by the special effects in the latest James Bond flick Skyfall or marvelled at the friendly ogre Shrek, did you know that they were actually produced in the Garden City of Bangalore? France-based Technicolor SA, a media and entertainment solutions provider and one of the first firms to make the transition from black-and-white movies to colour possible as far back as 1922, is the brain behind these fantastical images. Now the firm has re-organised itself around three areas: entertainment services, digital delivery and intellectual property licensing. Frederic Rose, Technicolor’s CEO, was in India recently and spoke to BW’s Venkatesha Babu about how Asia is helping the company revive its fortunes, about exciting innovations in the offing and how India plays a key role in Technicolor's growth strategy. Edited excerpts from the interview:

Technicolor is back from the brink of bankruptcy...from what could be called a near-death experience,. However, even today, 13 per cent of your revenue and 73 per cent of your gross income come from licensing out the treasure trove of the 40,000-plus patent portfolio the company has. Is Technicolor living in the past and feeding off its old glory?
No, not at all. While I would agree with your characterisation of a near-death experience, we are not living in the past. Over the last few quarters we have actually been doing well. In the latest quarter, for instance, our revenues were up 15.4 per cent to reach €928 million. We have been signing up new licensees for our technology portfolio... adding newer IP (intellectual property) for which people are ready to pay royalty, ready to pay money to license, meaning that they see value. I know what patents we will add over the next five years. We are known for bringing colour
to movies, but how many know that each time they listen to an MP3 file, that it is Technicolor’s technology that they are hearing? We are at the heart of MPEG 2 standards. While we do generate money from our past, we are reinvesting that to innovate for tomorrow.

What is Technicolor’s strategy in Asia and India?
The future of our business is in Asia. Who are the people who license our patents? They are mainly in Asia. The US and Europe markets are not growing. Asia is.

In India, where we have 1,200 (of the 17,000 globally) employees, we don’t have any domestic customers. We would at some point love to work with Bollywood when the budgets are large enough. What we wanted to do in India, and have succeeded in, is to build from scratch a world-class centre for animation and subsequently post-production, special effects and other areas. In the last three years, we have doubled our India numbers. We had a great experience recruiting, training and working with talented people here. When people think of the Madagascar movies, they think of it as an American product. No, it is not. Most of the movie was created here in Bangalore, India. Which is the reason why we are able to attract, train and retain the best talent because our artists are assured that they will work with A-grade movies, which are seen across the world.

You also supply set-top boxes (STB) to the likes of Tata Sky and Bharti Airtel. How do you effectively compete in the marketplace?
We have no profitability issues in the Indian context. It is a question of understanding what the market requires. We are very positive about our wins and relationships in the STB market in India. Three years ago we weren’t present here. This quarter, the India STB business will be the best ever. We are winning market share.

It’s said that discs are dead and the likes of Netflix (which streams video content) is the future. Then why does Technicolor continue to sell discs?
Somebody seems to have forgotten to tell the end customer that DVDs and Blu-ray discs are dead (smiles). Discs are still a hugely profitable business for everybody, including us. The content on discs are also on video-on-demand, but they are not cannibalising our sales. Discs will become history. But till that happens, they will sell in millions. The market may not be growing, but it is profitable and throws up free cash.

What are the technologies of tomorrow that really excite you?
There is lot of work going on in areas like bringing 3D technology to life without glasses. We are not focusing on that. What we are focusing on is making audio three-dimensional in a home environment. We are selective about the innovations and inventions that we want to focus on. The one I am personally excited about is the video-on-demand platform which we are jointly launching with Dreamworks in the US next month, which we will eventually roll out across the globe. We are also working on a search and recommendation service, which we will launch shortly.

Analysts feel that Technicolor is an example where the sum of the parts is supposed to be greater than the whole. Will you examine breaking up and selling the company in parts?
Fads come and go. Analysts might have their opinion. Just like the Internet bubble of 2000, there was a patent bubble in 2010 and 2011. While we are a listed company, my focus is on creating long-term value. The team and I are focused on building the innovations of tomorrow. India is a key part. This is not back-office work. This is completely export-related, world-class work for global customers. I am really excited by what we
are doing in India.