‘We’ll Have To Import More’ 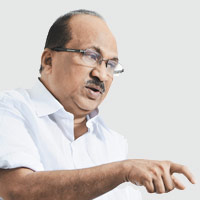 Minister of State (independent charge) for consumer affairs, food and public distribution K.V. Thomas feels that the drought situation in India is manageable and there will not be any shortage in food supplies. Talking to BW’s Joe C. Mathew and Chitra Narayanan, Thomas says the Centre will release 9 million tonnes of foodgrain and subsidised pulses into the domestic market to counter price rise. Excerpts: