‘We Will Not Print Notes’ 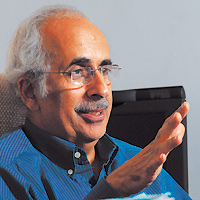 Budget 2009 has met with severe criticism and disappointment. Lack of big bang reforms, few announcements on disinvestment (one of the much-touted new initiatives that the new coalition had promised) followed by a collapse of the stockmarket has led many to question the basic objectives of this budget. Finance Secretary Ashok Chawla defends the budget and explains why he thinks it will push growth in an interview with BW's Anjuli Bhargava and Kandula Subramaniam. Excerpts:

The overall feeling is one of severe disappointment with the budget...

There are three or four broad consti-tuencies for any Budget. One is the aam aadmi and the rural sector. This constituency — which is less vocal — is actually quite happy both with the interim and this budget as a lot more money has been put behind improving their lot. The other constituency is industry. They are not very happy but my assessment is that they are not unhappy. The third consti-tuency are the financial intermediaries —including the stockmarket — which is definitely unhappy as there is nothing in this budget for them. The fourth constituency is the external constituency (FIIs and so on) — which intermingles with the financial intermediaries — that again is not very sure of whether the cautious reformers will overpower the reformers since the budget does not clearly spell out reform measures.

What were your constraints when the budget-making exercise began?

The main constraint was one of resources vis-a-vis the perception that we need to spend more to spur growth. This was clear not just at the time of this budget but even at the time of the interim budget. Already, public spending was high, but we needed to spend more. Revenues were not coming in both due to the economic situation and the concessions that had been given. Secondly, this new government had very little time, just 45 days, to present its road map. Clearly articulating all its intentions in such a short time sometimes becomes difficult.

The budget has allocated funds here and there, but there does not seem to be anything that will tackle the growth slowdown directly...

Now on the private sector side, they are apprehensive about spending. But we have tried to tackle this in the budget. There are three things identified as infrastructure where major tax concessions have been given. These are cold chains, warehouses and pipelines for crude oil and gas — for private sector or public sector. Hundred per cent of the expenditure has been allowed as deductible in that year.

Then, there are the continuing benefits, which have not been withdrawn in terms of tax concessions till March 2010. They have been extended in some cases for one year and, in the case of refineries, for two years.

There was apprehension that now that things have got better, tax concessions may be withdrawn (excise is down from 14 per cent to 8 per cent and service tax from 12 per cent to 10 per cent). So, not doing something in itself is doing something. These concessions cannot stay forever, but it was felt that this was not the right time to hike rates as the private sector must feel more comfortable. These are some of the things that were there in the budget. Unfortunately, it appears that some of this was lost in translation, or maybe the expectations after the Economic Survey were too high. But the budget had its constraints.

There is a massive borrowing progra-mme planned in Budget 2009 compared to the last budget... the FRBM Act has been forgotten altogether.

Well, the proposed spending has shot up but money is not coming in from anywhere, so there is no choice but to borrow. One cannot really compare this budget with the last one as the world has changed so much since March 2008. In the interim budget, a deficit of 5.5 per cent was projected. But even as the ink was still drying on that, more concessions were given. The FRBM Act, however, remains the way it is. If one does not remain within the limits set, the government has to inform Parliament of the special circumstances under which it was forced to deviate. However, the government realises that the deficit numbers are very high, and we remain very concerned about that.

What does this large government borrowing imply for the private sector?

While the government borrowing is certainly high, the private sector does not seem to be constrained for money. There is enough liquidity in the system. The private sector may be holding back on projects but that is not due to the lack of availability of funds. Liquidity is there; the fact that it is not being deployed in projects is another matter.

In any case, Rs 4 lakh crore cannot be borrowed directly from the market as the system would then simply collapse. Right from the start the government has decided, in consultation with the Reserve Bank of India (RBI), that there will be an element of open market operations. As and when there is a sense that liquidity is drying up, RBI will buy securities from the market and inject liquidity. So, close to half of the borrowing could be raised through the market (that much, it is felt, can be absorbed by the market) and the rest through these open market operations. Some people have misunderstood this to be monetisation. There is no monetisation which is just printing notes. That is barred under the law and will not happen.

But either way, will this have implications for interest rates?

Yes, that it will. That is why bond yields have already been hardening, as they say. But it is not much. The band moves between 6.23 per cent to about 7 per cent and then comes back. This has been happening for the last few months.

Will there be a change in the utilisation of the National Investment Fund?

There is a thinking that the way it is structured is too binding. It has to be decided by the Cabinet Committee on Economic Affairs. While it is a bit premature to talk of this, the point is that if, say, some of the money is spent on the social sector such as the Sarva Shiksha Abhiyan or one of the other priority schemes, to that extent, the budget will have to provide less for it.