‘We Are In No Hurry To Buy’ 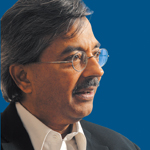 For any CEO, grappling with a problem of plenty is better than facing a crisis of shortage. But when the same CEO heads a listed company, he has to balance a lot many interests than just his company’s. Genpact CEO Pramod Bhasin is in the midst of that tangle. He met BW’s Sunny Sen and Rajeev Dubey at his office to answer how he is dealing with the recession, resurgent competition from IT rivals and needs of his stakeholders. Excerpts:

Have you been unlucky with buys? What went wrong with UBS and WNS?
We want to buy something... I don’t know whether we have been unlucky or very lucky (for having avoided a mistake). Don’t listen to the world; it doesn’t have a goddamn clue. We are very careful buyers, and I won’t comment on specifics. We buy for value and the right price. There are very few deals that have gone by, which we regret not having done... 50 per cent of acquisitions go wrong. We are in no hurry. We will do the right deal at the right time.
What exactly are you looking for in an acquisition?
Ideally, three-four characteristics. It can add to our current product lines, bring in a new customer base, has offshore ability; and enhances our EBITDA (earnings before interest taxes depreciation and amortisation). It should also bring in a great management team and cultural synergies.
There is a rush to expand geographi-cally. How does it affect Indian BPOs?
We don’t think of ourselves as an Indian BPO business. Our shareholders are overseas. We are listed in New York. I have an Indian passport, but that doesn’t mean I will do business only in India. If China is better, we will move there. In the long term, India will face threats. Philippines is winning in voice.
There have been reports of Oak Hill Partners and General Atlantic exiting...
They are long-term investors and they are happy. They want liquidity at various times; but don’t want to sell off everything.
Are a lot of BPO contracts going to IT-BPO firms than pure players like you?
The point about big firms taking over is not true. The number of contracts are very few. A lot of these IT firms are entering this field, as it is a terrific area for growth. They will compete, but we should not get too swayed by it; we have been competing with the IBMs, HPs and Accentures for years. None of these new ones has a different business model. This debate has been fuelled by the fact that the bulk of players in the industry are technology firms. They are just pushing their agenda.
So, are we going to see greater segmentation and specialisation?
Absolutely. For Genpact, it will be managing business processes. Industries such as BFSI, pharmaceuticals, healthcare, manufacturing and industrials, telecom and energy have been a large bucket. We would also call SMEs a separate vertical. We want to be very strong in finance and accounting, analytics, risk management, sourcing and supply chain, order and billing management.
Full Text Of The Pramod  Bhasin Interview
(This story was published in Businessworld Issue Dated 15-02-2010)
Tags assigned to this article:
magazine interview rajeev dubey sunny sen genpact pramod bhasin