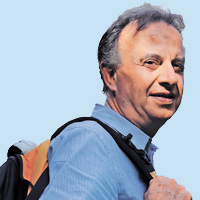 Hamish McDonald's previous book — An Unauthorised Biography published in 1998 — The Polyester Prince: The Rise Of Dhirubhai Ambani met with legal resistance from Reliance Industries. Its Indian publisher HarperCollins withdrew from the project. It was published by Australian publisher Allen & Unwin, but was denied permission for sale in India. So the lack of opposition to his new book Ambani & Sons has intrigued McDonald and everybody else. Especially since the book draws heavily from the old one. It is equally controversial, including errors such as a Kashmir-less map of India. BW's Rajeev Dubey met McDonald in Delhi. Excerpts from the interview:

How sure are you the new book won't meet with Reliance's resistance?

There were injunctions, not a ban. They took objection to a number of passages. It was a company application, not in the name of Dhirubhai Ambani. We've had no communication, and there was no response to my messages to the brothers asking if they wanted to talk about the update. Now Roli Books has actually published it, and brought it out in the shops and, so far, there is no legal activity from Reliance or either of the brothers. It may be early days, but the signals Roli Books is getting are that times have changed. The Ambanis are much more sanguine about criticism.

Did Roli check with the Ambanis before publishing this book?

Not at all. Roli studied the book closely. Had their lawyers run through the book.

Tell us about the attempts you made to get the Ambani side of the story.

In the previous version, I had had some interviews and contacts with the Ambanis — father, and mostly with Anil. I had met Mukesh rather formally. I asked Dhirubhai (in 1995) that I wanted to write a book about the rise of Reliance. I suppose he was both flattered and alarmed. I said I would show him the manuscripts if he wanted to argue any of the points. That I would hear what he said, but the author's right would be mine. He said that would be fair. As I got closer to the controversies such as the Isle of Mann companies, the access to the circle of friends and Reliance was cut off. I rang up Dhirubhai's secretary, and he said the wish was that the book should not come out.

Have you made any changes in the parts that Reliance found objectionable?

The first half is sharp and insightful. The second relies on media reports.

It is a valid criticism. That was (the) disadvantage of being away from India.

Can you support your allegation of share-price manipulation in court?

It has been investigated pretty thoroughly by the deputy commissioner of taxation in Bombay (Brijesh Singh). There is a thorough report called ‘Piercing the Corporate Veil'. That is a solid piece of forensic accounting that details the way in which the whole network of holding companies was used to actively manage the promoters' holding (Editor's note: The case was inconclusive).

Your references to Pranab Mukherjee, finance minister, are rather strong.

It is history. Much worse things than what I have said of Mukherjee have been aired in the media. If he didn't worry about it then, I can't see how he should worry now.

What about Murli Deora? Did you try to meet him?

He was not much helpful. I don't think he wanted to reveal any secrets or help in things Dhirubhai wasn't cooperating with.

You have written, "Rajiv seemed to lack the mental drive to push himself to higher achievement"...

I gave a portrait of how Rajiv (Gandhi) was when he was thrust into politics and power very quickly. He got rattled rather easily due to his limited interest and experience in politics. He could be easily panicked by somebody like Dhirubhai. I don't think the Gandhi family should be upset of this book.

Is Sonia Gandhi a tougher politician in your opinion?

Yes, she has had the benefit of such a long time (in politics).

How much support did you get from the Wadia camp in researching the book?

There were people in the non-Ambani camp who spoke to me for that period. I do not have their clearance to talk about them. I was rather impressed by the quality of Ambani's enemies and was less impressed by those who had aligned themselves with him.

Which brother is the smarter business-man? Who manages image better?

It's still a bit of a work in progress. Anil has more command of himself in public. He's a bolder public figure. Mukesh is more articulate in a league forum or in a one-to-one with a very high-level interchange. Don't think he projects to a larger audience all that well. Mukesh has made a big mistake with Antilia (new residence under construction). It's a projection of extravagance. It sticks out a lot to the people of Mumbai. It gets a lot of attention. It looks like something very excessive and self-indulgent.

Who is better at spotting opportunities?

Both are good. Mukesh looks more at it from a macro scale. Anil looks at it from an individual level, from personal tastes. They come at it from different ways.

Who is a better human being?

Both are trying to broaden themselves. It must have been a stunning experience to have people focusing on your personalities and psychological exercises.

Ten years down the line, who do you think would do better?

Mukesh is in an overwhelmingly dominant position. Anil is in a much tighter position. (He) can't afford to make mistakes. I would say Anil won't be in the same league as Mukesh. (He) may not always be in the A-class, but may find it more rewarding to be a producer of an occasional smash hit movie or to have popular TV programmes or to be more of a (Rupert) Murdoch than a Carlos Slim.