New Delhi (India), December 12 (ANI): Bollywood actor Kangana Ranaut penned a heartfelt note for the entire crew of her upcoming multilingual biographical film 'Thalaivi' while sharing a still of her striking victory pose from the movie.
Expressing her love for the movie and the character she played in her most-anticipated film, Kangana, on Saturday shared that she has finished shooting for her upcoming movie 'Thalaivi'.
The 'Queen' star posted two pictures- first features a still of her character from the film, and second of the young political leader Jayalalitha which captures both of them striking the victory pose.
In the pictures, posted on Twitter, fans can catch a glimpse of the 33-year-old donning the same pure white saree with red and black coloured borders as the late Tamil Nadu Chief Minister used to wear.
Kangana tweeted, "And it's a wrap, today we successfully completed the filming of our most ambitious project Thalaivi- the revolutionary leader, rarely an actor finds a character that comes alive in flesh and blood and I fall in love so hard but now suddenly it's time to say bye, mixed feelings," with a red heart emoticon. 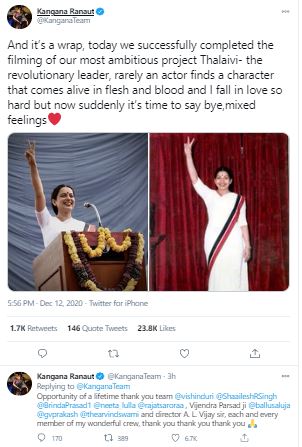 "Opportunity of a lifetime thank you team @vishinduri @ShaaileshRSingh @BrindaPrasad1 @neeta_lulla @rajatsaroraa, Vijendra Parsad Ji @ballusaluja @gvprakash @thearvindswami and director A. L. Vijay sir, each and every member of my wonderful crew, thank you thank you thank you," she wrote using folding hands emoticon while thanking the whole crew of the flick.
'Thalaivi' is written by 'Baahubali' and 'Manikarnika' writer KV Vijayendra Prasad and 'The Dirty Picture' and 'Once Upon a Time in Mumbai' writer Rajat Arora.
The release date of the film has not yet been decided after it was postponed due to the coronavirus pandemic. (ANI)