'The Way China Influences Is Different From India' 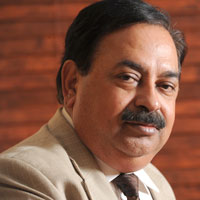 08 November, 2014
Print this article Font size -16+
Growing demand for oil and gas has kept India's biggest upstream company Oil & Natural Gas Corporation (ONGC) at the forefront of the nation's quest for more fossil fuels. But it has met with serious hurdles in $3.1 billion worth of investments in Sudan and Syria, even as Chinese oil companies are using all means-both financial and diplomatic-to keep Indian firms from acquiring critical global assets. On the domestic front, ONGC is struggling to keep its place as the premier explorer. BW| Businessworld's Chhavi Tyagi met with ONGC chairman and managing director, Sudhir Vasudeva, to ask how the company will tackle these challenges. Excerpts:

How are you dealing with ONGC's investments in troubled areas such as Sudan and Syria?
In Sudan, our production got affected last year because of Sudan and South Sudan secession. These two countries were fighting with each other on evacuation facilities and reserves which affected our business. However, that problem has been sorted out and production from North Sudan is now normal while production from South Sudan is limping back to normal.

Syria is still a matter of concern as nothing is getting done there. However, our investments in other countries will soon start monetising. Production is expected to start sooner than later from Myanmar and Sakhalin. All of this will compensate for Syria troubles.

We are also trying for 20 per cent share in Mozambique. Also, our interest in Kashagan is one step closer now. We are only waiting for the Kazakhstan government to approve. Once that is done, we will add another 1-1.6 mt to our kitty. That production is likely to start year end or early next year.

There have been reports of Chinese companies trying to steal Kashagan asset from under ONGC's nose. How is the government dealing with that?
The government of India knows very well. When 75 per cent of our oil requirement and 25 per cent of our gas requirement is being imported, you can't say that the government is not bothered. They must have their compulsions and there is a material difference between resources available with China and India. The way China can influence anyone vis-a-vis what we can do is different.

Why has ONGC not invested in any of the US shale assets?
We are trying to take some upstream investment but there are some issues that have come about. There are issues with our subsidiary, OVL (ONGC Videsh Ltd.) being present in countries such as Sudan, Syria and Iran which have sanctions imposed on them by the US. So, if we are doing business with these countries, it becomes a little difficult to get into the US. These issues are being addressed and we are waiting for more clarity on this.

Will you consider divesting assets in these troubled countries and investing in the US?
One has to take a cautious call between the present assets and the future opportunities. In case we get a very big opportunity which compels us to take a decision about divesting and disposing our existing assets in favour of other assets, we will take a decision like any other management.

Is ONGC preparing for domestic exploration of shale gas?
Shale gas in India will take time. It will take a month for the policy to be announced. Then, blocks will be announced, auction of these blocks will take another 6-9 months. Add to it 3 years of exploration period and field development plans. To sum it up, it will take a minimum of 5-6 years to feel the impact of shale gas in India.  Though we can start shale production in a year from now but will it really make that kind of impact? Today, ONGC is producing 65 million cubic metre of gas per day. Will I be able to produce even 6.5 million cubic meter of shale soon? That is not going to happen anytime soon.

The chances of shale exploration making an impact depend on whether the producers encounter shale, whether they are interested in exploring their shale? Normally, Indian shale is deeper and it would cost more money for horizontal and hydraulic fracturing and unless one gets a proper price for gas, one may not be willing to take it up. The producers have to work out the economics and the viability of producing shale gas. This will be a determining factor.

What are the challenges in shale gas exploration in India?
Shale is not very difficult when it comes to technology as CBM exploration also requires fracturing. The major issue in shale is land acquisition and the lower productivity of wells. Compared to one well for conventional hydrocarbon, for shale exploration a producer has to drill anywhere between 2-6 wells per square km. With shale, the numbers of wells to be drilled increases and if the land is not available then how do you do that?

For hydraulic fracturing we need water and water availability is less when compared to other countries. Our population is now 17 per cent of the world's population and compared to that water availability is very low. Also, 87 per cent of our water is used for arable purposes and if you want to divert this water for other use you will face a lot of resistance from farmers.

The US has large tracts of land available and the sub surface rights belong to the land owners, unlike in India. Add to that the infrastructure availability. Today, more than 2000 rigs are digging and drilling for shale in the US, hydro fracturing units are available which can quickly be mobilised and a robust pipeline network of 5 million kilometres. Any operator in the US only needs to lay a few kilometers of pipeline to get connected to the network. He is not bothered about the marketing of gas. This is not the case in India.

In India nobody is going to bring rigs or hydro fracturing units of they are not assured of business. All these issues have to be addressed holistically and it would take time.

CBM production has been very slow in the country, what is ONGC doing there?
We have four blocks with us — Bokaro, Raniganj, North and South Karanpura — and we have already spent nearly 500 crore on these. Admittedly, our production is very small in quantity and we have several issues concerning geo political factors and land related but all of these are being addressed. We are in the process of giving part of equity to private companies which will help us so they will help us in bringing better technology. Also, rather than laying our eggs in one basket we have given out varying stakes to private companies in each block. The arrangement leaves the control on gas marketing and pricing with us and the rest of the work will be done by the private companies. Our projection with regard to CBM is to have around 6 million cubic meters of gas production in the foreseeable future as compared to only 10,000 cubic meters at present.

How far can ONGC contribute to the petroleum ministry's target of achieving self-reliance in fuel by 2030?
The minister has a very lofty plan of having zero imports by 2030. However, this could only be achieved by increasing domestic production and demand side management. For demand side management, improvement in the efficiency of transport sector can be one giant step. On the other hand, we have to increase domestic production. At present, 34 per cent or 1 million square km of area is still left to be explored. We have to increase the speed of exploration in the country as well as the monetisation of the discoveries. Also, unconventional resources like shale gas, CBM and underground coal gasification also needs to be given a push. The gap then also needs to be filled by bringing in renewables.

In this direction we have already drawn our Perspective Plan 2030. At the time of finalising the plan, ONGC was producing 61 mt of oil and oil equivalent between domestic sources, share in joint venture projects and overseas investment. While the current production has slipped to 58 mt due to temporary setbacks in Sudan and Syria we are confident of more than doubling this to produce 130 mt by 2030.

What is ONGC's current focus in India?
We are currently engaged in finishing the appraisal of the KG-DWN-98/2 field in Mahanadi. Based on the appraisal we are going to make a field development plan.  We have a lot of hopes from this field. We have represented to the ministry as well as in our Perspective Plan mentions that this NELP block and a few nominated blocks around it can together have a potential of 30-35 million tonnes (mt).

We are also in the process of monetising the discoveries made earlier. Last year we added 84.84 mt of reserves. This is the highest accretion we have done. Our reserve to replacement ratio was more than 1.8. This is so far the highest. Seventy per cent of our production comes from offshore fields but this doesn't mean that we are neglecting our onshore fields. In onshore, we are focusing on renewal of our facilities as some of them have become really old. We have already started our Assam Renewal project costing around Rs 2,500 crore. Also, since 2010 we have taken up development of our 39 marginal fields. All these 39 fields were put up under cluster development which is going to be monetised in 2013-14.   We are investing around Rs 26,000 crore and these fields are expected to add about 110 mt of oil and oil equivalent.
Tags assigned to this article:
exclusive to web oil ongc interview natural gas shale gas chhavi tyagi othertop2 sudhir vasudeva ovl