‘Spectrum Fee Will Hit All’ 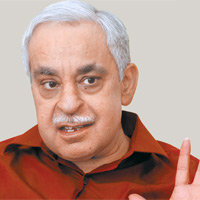 08 November, 2014
Print this article Font size -16+
Ever since he took charge as chairman of the Telecom Regulatory Authority of India (Trai), Rahul Khullar, former commerce secretary and a seasoned bureaucrat, has been learning everything there is to learn about the telecommunications sector. Meticulous in approach, he confirms details with junior colleagues before answering questions posed by the media. He spoke to Businessworld’s Anjuli Bhargava about the issues plaguing the sector before the 2G auctions. Excerpts:

Now that the recommendations of the empowered group of ministers (EGoM) on one-time spectrum charge have gone through, what will be the impact on the various telecom players?
These players will now have to pay a much higher spectrum charge than the price at which they got it some 15 years ago. But this will hit all players equally. None of them is making the kind of money as in the past. Some companies may have taken wrong decisions — taking up old technology or expanding into new countries that are yet to yield results. But over and above these, the fact is that tariffs in India have fallen dramatically. There has been a race to the bottom. Tariffs are no longer viable. There are too many competitors and over-competitiveness is pushing prices down to unviable levels. In most jurisdictions, there are 3-4 strong competitors and that works quite well (for the consumer).

There are 3-4 companies that are in deep trouble — over-leveraged with very high debtequity ratios. In some cases, the equity has been wiped out.

The industry is in real trouble. If you look at the quarterly results, and I am not talking about any specific player, their margins are contracting; EBITDA margins are very small — they used to be 40 per cent, now they are down to 12-30 per cent.

If consolidation does not take place, it is simply not possible for this industry to carry on the way it is.

Why is broadband wireless access (BWA) being delayed?
There is one large player who has failed to roll out services. The BWA auction took place at the same time as the 3G auction in 2010. Reliance Communications won spectrum on a pan-India basis (Airtel and Qualcomm got some). Airtel bought over what Qualcomm got. Reliance Communications is in the process of establishing a fibre-optic network. By next year, they may roll out services. But they do not have permission to carry voice.

Broadband is an important area but it is yet to take off fully. For services to be viable, players need to offer both voice and data. Also, the validity of the licence is from the date of issue. The spectrum (licence) will lapse in 10 years. So, the earlier they roll out, the better it is for the licensee who paid Rs 3,500 crore per MHz of spectrum.

Why is the 3G rollout slow and the quality of service poor?
So they bid through the roof. For consumers who are used to 2G services, the jump to 3G at a much higher price is a deterrent because all of them are using it primarily for Internet. The actual graduation to 3G will be for those who use and handle large amounts of data — video downloads, video streaming, and so on.

So, there are many deterrents — the price at which 3G can be offered, the demand for it, and the penetration of 3G-compatible instruments (just 5-6 per cent). A few months ago, they slashed prices by 70 per cent; now hopefully data will pick up. Also, as prices of instruments come down, things will pick up.

Lastly, the telecom service providers have been strapped for cash so they have not spent the necessary capital for a full-scale rollout. For example, a person in a remote village does not care about 2G and 3G; he doesn’t even know what the Internet is. For him voice is important. So if I need to erect a tower to carry voice, I will do it. But if I have to install equipment to get 3G there, why would I do it? In one sense, the incentive to invest has not been there.

Even when the service is available, you pay 3G prices but don’t get 3G quality. The speed is one-third of what it ought to be.

What happened to the sale of 700 MHz spectrum?
The lower the frequency, the better the spectrum. So, 700 MHz is to be used for LTE (long-term evolution). This has been rolled out in some countries but we are still 2-3 years away from it. The LTE spectrum will be auctioned after we complete the refarming. The GSM players who are at 800 Mhz will be pushed towards LTE. Vacate 900 Mhz, sell 900 Mhz, and then sell 700 MHz.

Why is no global player interested in entering India’s telecommunications sector?
Simple, there is no money to be made. With rising spectrum prices and cut-throat competition, it doesn’t make sense to invest. With 7-8 players, the industry is already crowded; it is not a question of policy being wrong.

Also, past decisions are putting pressure on the industry. Wage and diesel (gensets are on all day) costs are high. Since competition is intense, the cost of acquiring and retaining a customer is also high.

On the revenue side, you expected data to grow (3G); that has not happened. Voice has also not grown. Tariffs have in fact fallen. So revenue is either plateauing or falling, while costs are rising. So your operating margins are being squeezed. Who are the claimants to your operating margins? Depreciation, amortisation, interest to the bank, then taxes. So your debt and interest costs are huge.

This will take 2-3 years to sort itself out. By 2014-15, the industry will start turning around. Nominal interest rates will decline, debt is being retired, and people are getting rid of useless assets (Infratel is being sold, Airtel is selling its tower business). Capital costs were high in 2010; by 2014-15, a lot of the amortisation will be done. Depreciation will plateau as you will not be acquiring any new assets. Revenues will pick up with 3G data demand. India’s overall growth rate will not stay at 5.5 per cent, so overall demand will grow.

So now we need to see which players survive this tough phase and are there till 2014-15...
Correct. But you said that, not me.