New Delhi [India], February 4 (ANI): Bollywood actor Manoj Bajpayee and Indian filmmaker Neeraj Pandey have teamed up for a new Discovery original history show titled 'Secrets of Sinauli', the motion posters of which were released on Thursday.
The new Discovery history show, 'Secrets of Sinauli' will divulge the biggest revelation of the 21st century, revolving around the changes brought by Western countries to the history of India.
Discovery plus India has released the motion poster of the show on their official social media accounts disclosing that the show will be presented by Neeraj Pandey following the narration by Manoj Bajpayee. 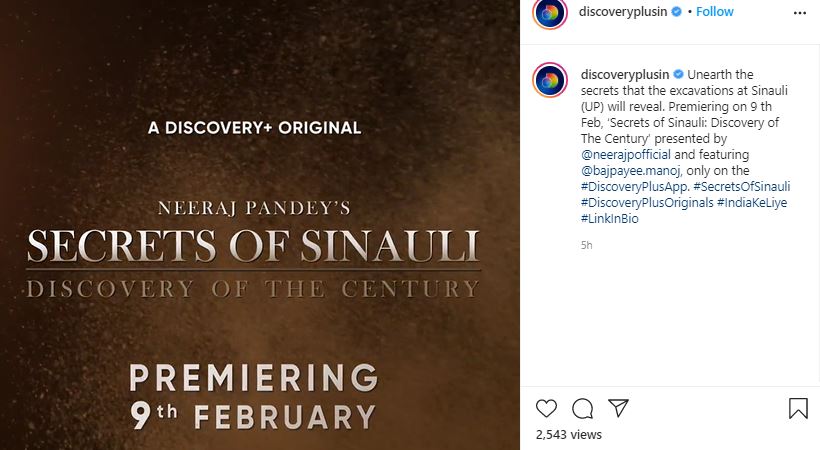 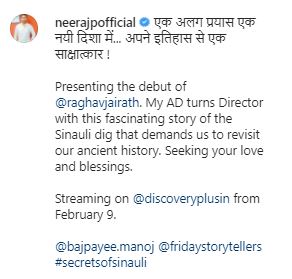 Introducing his AD turned director in the caption, he wrote, "Presenting the debut of @raghavjairath. My AD turns Director with this fascinating story of the Sinauli dig that demands us to revisit our ancient history. Seeking your love and blessings. Streaming on @discoveryplusin from February 9."
'Secrets of Sinauli' that will premier on February 9, will unite Pandey and Bajpayee for the fifth time after working together in 'Special 26', 'Naam Shabana', 'Saat Uchakkey' and 'Aiyaary'.
Manoj Bajpayee also took to his official social media accounts to post about his new project.

Along with the motion poster, he wrote, "Secrets about Indian History revealed after 4000 years, in one of the biggest discoveries of the 21st Century. Unravel these secrets with @discoveryplusin original Secrets of Sinauli: Discovery of The Century releasing on 9th February." 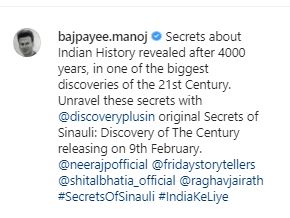 Meanwhile, on the work front, Bajpayee was recently seen in 'Suraj Pe Mangal Bhari' that also stars Fatima Sana Shaikh and Diljit Dosanjh which was released after six months of COVID-19 pandemic induced nationwide lockdown. Besides this, the Padma- Shri award winner will next be seen in the second season of his much-loved Amazon Prime Video-based show 'The Family Man' to be premiered on February 12.
Whereas, he also has a direct-to-digital RSVP thriller project 'Despatch' in collaboration with Indian director Kanu Behl in the pipeline. (ANI)