New Delhi [India], August 2 (ANI): India batsman Rohit Sharma on Sunday revealed his favourite century of the ICC Men's World Cup 2019 which was jointly hosted by England and Wales.
The right-handed flamboyant batsman picked his 122-run unbeaten knock against South Africa when a fan asked about his favourite World Cup ton in a question and answer session on Twitter.
"My favourite hundred in the World Cup last year was against South Africa, the first game we played. Although it was a low total but the conditions were quite challenging and the bowling attack was really good," Rohit said in a video posted on his Twitter account. 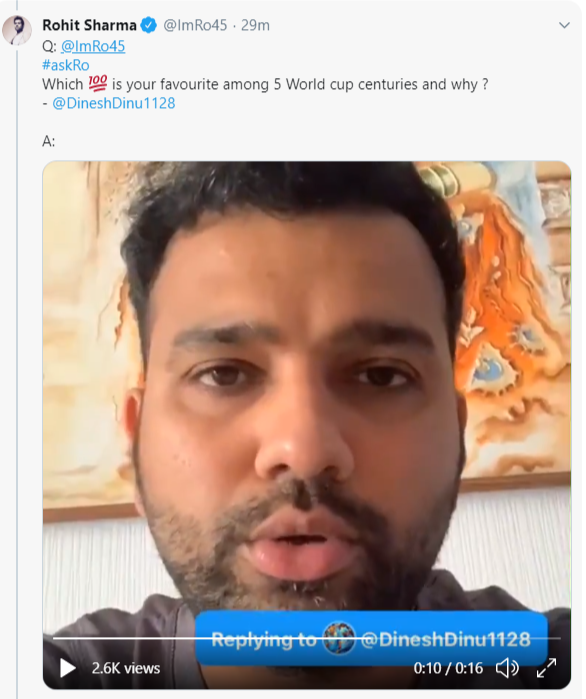 Rohit's knock guided India to a comfortable six wickets win against Proteas in the opening game of the side. Earlier, Indian spinner Yuzvendra Chahal picked four wickets and restricted the opponents to 227/9 in their fifty overs.
Rohit was also awarded Player of the Match for his match-winning innings.
Last year's World Cup had been phenomenal for the opening batsman as he was the highest scorer of the event including five centuries and one fifty in nine games.
He scored 648 runs in the tournament and became the first batsman to hit five centuries in the single edition of the World Cup history.
He broke Kumar Sangakkara's record of four centuries in a single edition of the World Cup.
Now a vice-captain of the ODI squad, he has played 224 ODIs, 108 T20Is and 32 Tests so far. He has scored 14,029 runs across all formats.
The 33-year-old is the only player in the world to have three double tons to his credit in ODI cricket.
He also holds the record for the highest individual score in the 50-over format for his knock of 264 runs against Sri Lanka at the Eden Gardens.
Rohit was also nominated for Rajiv Gandhi Khel Ratna Award 2020 by the Board of Control for Cricket in India (BCCI). (ANI)