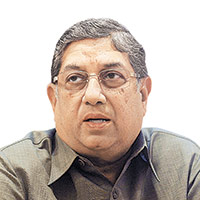 08 November, 2014
Print this article Font size -16+
In a setback to N. Srinivasan, chief of the Board of Control for Cricket in India (BCCI), the Supreme Court (SC) has named former skipper Sunil Gavaskar as the interim working president of the board to oversee the Indian Premier League (IPL). It put senior vice-president Shivlal Yadav in charge of all other BCCI duties. The arrangement will be for the duration of  its investigation into betting and spot-fixing in IPL 6. Srinivasan, 69, had so far staved off demands to quit even after son-in-law Gurunath Meiyappan was alleged to have played a key role in the scandal. The SC, however, allowed Chennai Super Kings (CSK), owned by Srinivasan-owned India Cements, to participate in IPL 7.

Cuppa Cheer
Popular talk show host Oprah Winfrey now has her own blend of tea called Oprah Chai. Created by her, in collaboration with tea experts at Starbucks and Teavana — bought over by the world’s largest coffee chain — the line will be sold in Starbucks and Teavana stores across the US and Canada from April 29.

New Beginning
Former International Monetary Fund chief Dominique Strauss-Kahn, who fell from grace in 2011 amid accusations of sexual misconduct, is looking to raise $2 billion for a new hedge fund. Aimed at institutional investors and high net worth individuals, the fund has been set up by LSK & Partners, a financial firm founded by Kahn  and banker Thierry Leyne. Kahn’s daughter Vanessa will head the fund’s research team.

Heir Apparent?
Named the non-executive chairman of News Corp and 21st Century Fox Inc, Lachlan Murdoch, son of billionaire Rupert Murdoch,  will work alongside his father, who will stay  chairman and chief executive officer of Fox and executive chairman of News Corp. The 42-year-old returns to a leadership role in his father’s business after running his own company for several years, and ranks higher than younger brother James, 41.

No Mercy
There’s no respite for Sahara chief Subrata Roy. Not just yet. Weeks after he was taken into custody on 4 March along with two other directors, the Supreme Court agreed to grant him conditional bail on payment of Rs 10,000 crore — half in cash and the rest as a bank guarantee, but Sahara couldn’t make the payment. It offered Rs 2,500 crore, but the court refused to relent. It also rejected Sahara’s earlier proposal to pay pay Rs 20,000 crore in five instalments by 31 March 2015 to investors.

Office For Apple
In his first public event as CEO of Microsoft, Satya Nadella unveiled Office software for Apple Inc’s iPad. Available as a free download, the Office apps — Excel, Word and PowerPoint — will require a subscription to Office 365 for editing and creating  documents. The CEO also spoke about a new cloud-centric approach to computing.

Still Guilty
Former Goldman Sachs director Rajat Gupta, 65,has been sentenced to two years in prison after his bid to overturn his insider trading conviction on the ground that wiretap evidence shouldn’t have been used was rejected by a US court. Gupta was found guilty in June 2012 of leaking information about Goldman’s finances, including a crucial investment by Warren Buffett’s Berkshire Hathaway Inc, over the phone to Galleon Group hedge fund founder Raj Rajaratnam.

Exit Strategy
Fang Fang, JP Morgan Chase & Co’s investment banking CEO for China, has resigned after a 12-year stint at the firm. The banker quit amid investigations into the bank’s hiring practices. He had emerged as a key figure for US authorities examining whether the bank violated laws by improperly hiring relatives of well-connected Chinese officials.