'Reunited': Kareena Kapoor shares a glimpse of re-union with BFFs

'Reunited': Kareena Kapoor shares a glimpse of re-union with BFFs

Mumbai (Maharashtra) [India], January 9 (ANI): Reuniting with her BFFs after a long time, mom-to-be Kareena Kapoor on Saturday gave her fans a glimpse of a get together with her girl gang.
The 'Tashan' star took to Instagram and shared a glimpse of the reunion with her friends - Malaika Arora, Amrita Arora, Mallika Bhatt, and Natasha Poonawalla.
In the photo, Kareena is seen sporting a blue silk dress as she wore a no make-up look and stunningly posed for the camera. Sporting a white ensemble Malaika looks gorgeous as she strikes a pose for the picture next to Mallika and Amrita.
The picture seems to be captured over a rooftop cafe, in which the girl gang cherished their meet. 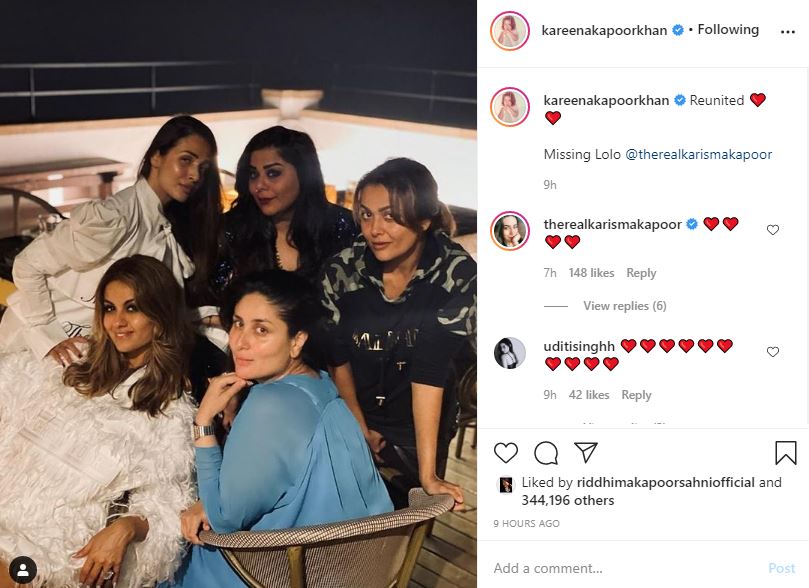 Missing from the get together was the 'Raja Hindustani' star Karisma, who also chimed into the comments section and left red heart emoticons.

Fans also left red heart emoticons over the post to shower love on the girls, who got reunited after a long time.

Of late, Kapoor has been quite active on social media and has been updating fans on her activities by posting pictures and videos.

Earlier, the 'Jab We Met' actor reminisced about the time when she did not have a baby bump and could, therefore, wear her tight fitted jeans. (ANI)