‘Restructuring Has Been A Way Of Life’ 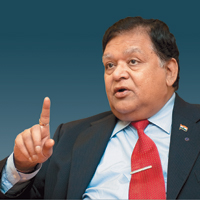 A.M. Naik doesn't think of Larsen & Toubro (L&T), the company he has led for over 10 years and worked in for over 45, as a private sector corporate entity, but as a "nation-building engine". That kind of sentiment usually draws a cynical smile, but Naik himself believes in it most passionately. On a public platform that he shared with former finance minister P. Chidambaram and World Bank officials, he pointed out that India was shining only in about 12-14 cities. "All those six and eight-lane highways L&T builds are of little use if the branches that need to connect the towns and villages, that are a little distance away, are not built as well," he says.

That is a personal view. L&T will not build those roads because those projects would not be of the scale (at least Rs 1,000 crore in revenues) that the company usually undertakes. His vision is of a conglomerate on the scale of a global company, though he may not be in office when that happens — Naik steps down in September 2012. He spoke to BW 's Srikanth Srinivas about L&T's vision and where it would go from here. Excerpts:

Industrial growth has not been very robust, and it will be a while before India gets back on the high growth track. What do you see happening with L&T in the next two years?

I would say L&T would still do reason-ably well — maybe not the way we were growing before, at 30-35 per cent. But I think in the next couple years we will grow between 15 and 25 per cent. The reason is that there were so many projects during the boom that we could not address all of them, and that brought other companies up. But timely completion (of projects) is paramount, which is one thing L&T is good at. Second, financing is extremely difficult. Previously, it was much easier to financially close power or infrastructure proj-ects. I don't see public or private equity finance coming back for at least 9-12 months because they have to put their own house in order.

Where do you see this growth coming from then?

For every 10 projects going, we were addressing only three or four, or 40 per cent, not bidding for the rest. That 10 may have become five, but we are now going for 75 per cent (of them). Our commitment to timely delivery and the ability to take up a very large project financially will give us an edge while taking orders. But that does not give you a growth beyond 5-7 per cent. Our new foray into power — we anticipate an order book of Rs 15,000 crore — will bring us another 10 per cent growth. We were not in railways before; 5 per cent of our order book will come from there. We have just opened an office in South Africa, and have been aggressive in Saudi Arabia and the Gulf countries. From $800-900 million, we will double revenues to $1.5-2 billi-on in the next two-three years. That gives us another 5-7 per cent. We plan to close the year with, say, a 24 per cent growth in order intake.

Reports suggest that there have been some implementation delays due to global economic conditions and cost over-runs. How do you manage the risks, given the enormous diversities?

We have a highly institutionalised risk- management process — same for projects in India and outside. Our risk-management process goes through four levels of committees. Each of our 12 operating companies has a chief executive, and their own board. For a small project of, say, Rs 150-200 crore, the chief executive and his board can decide. When it gets to Rs 500 crore, a central financial officer and the chief risk officer will sit for risk review. When it goes up to Rs 1,000 crore, the president of the division and the group CFO will be in the committee. And the moment it crosses Rs 1,000 crore, I sit in the committee. Over half the projects that we bid for are Rs 1,000-crore plus. We had hiccups in the past, before risk management was institutionalised. Seven or eight years ago, our margins were about 4 per cent. In the past five years we have raised that to 12 per cent.

You took a big risk to acquire Satyam, and did not succeed. What happens to your IT business, how will you scale it up?

Well, we are not that small now. I think we were among the best in IT. I strongly believe internal IT is at the core of producti-vity, quality of delivery and customer relation-ships. Unfortunately, we lost our IT talent in a short span of time. Quite a few of them joined Satyam and other IT firms. My motivation in starting L&T Infotech was never to become a huge company. It started for a ring-fencing of crucial talent within the L&T group. Our ambition is not to become a $5-billion IT firm; if we can become a $1-billion one, we would still be a preferred choice of our customers. So $500 million to $1 billion is our immediate goal over the next two-three years. And I think we are quite satisfied with the situation.

You did a lot of restructuring in 2002-03; got rid of businesses such as cement. I wonder whether this downturn is setting another stage for restructuring or at least a serious look at rationalisation.

First of all, I started restructuring in 1999, almost as soon as I took over as CEO. It was noticed more widely in 2003 when we demerged the cement business and prepared to sell it to Grasim. The new vision we came up with in November 1999 was the result of 7,500 people participating in an interactive process across the country. The central message was that L&T would become a multinational and create shareholder value. We always took pride in very high quality and difficult projects, but missed the fact that L&T shareholders deserve more. Changing that orientation was critical and it became a part of transformation itself. We put together our first five-year strategic plan for 2001-05 in 2000: a project for creating a blue-chip company. We got rid of a lot of small businesses — glass, ready-mix concrete and, finally, cement. In 2004, we began the next one, for 2006-10, which will end in March next year.

Now we are working on the 2011-15 blueprint, which should be ready by January-February 2010. That is where we have inclu-ded our strategy in defence, nuclear energy, big-ticket infrastructure projects; areas where we will be taking on global competition. We have to go for very large projects ($1-2 billion), driven by our engineering excellence. We have to be more international, be globally compe-titive. Restructuring has been a way of life; our transformation is a journey we started in 1999.

All the actions we are taking now will make L&T a technological growth engine. So what we would like to be in 2015 is a company with greater technological excellence, which indulges in very complex projects. We will be a very heavy core-infrastructure builder. We want to be the Indian equivalent of Mitsubishi Heavy Industries, which can take on any global competitor in advanced technological missions, whether it is in nuclear energy, aerospace, defence or infrastructure. This is what I would like to see L&T as; all the other things must get out of the way.