‘Reducing Subsidies Is Not The Solution’ 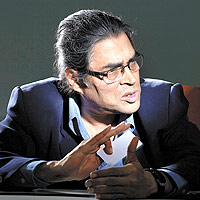 Well, if you were the finance minister, what would you do on NREGA and other things?
I would commit suicide (laughs), but anyway, he has a tough job this year. I don't envy him. Actually from 2004 onwards, we have been pretty much on the right track. We promise employment, freedom from hunger, education for all, health (there is health insurance for below-poverty-line households and so on) and civil liberties (though marginally, through RTI). So in a sense, I have everything I need. What else do you need to empower a person?

Except that it is all in theory. On the ground, nothing has actually happened.

Absolutely. And that is because the intellectuals took over. You and me; we study everything, we look at every example — Australia has done this, Brazil has done that, UK did this. We try and solve each problem through someone else's experience. We never think "this is my problem, this is my context and what do I need to do to resolve it?" If I were the finance minister, I would not make expert committees. No more task forces. I would not just throw money to solve problems.

I would announce a fund — a pot of money — and all problems need to be solved through this fund. Let everyone come up with ideas for food security and let's try them. Let's say we try three new ideas and then see which is effective. I would not thrust things on a bunch of bureaucrats or onto the laps of experts. The last thing you ask is how much money do I need. The first thing to ask is what I want? I don't think we even know that.

In health, for instance, we should be discu-ssing allocation of scarce resources. A hospital has limited resources — should it save the life of a child or a 50-year-old. These are debates we should be having. Instead, what are we discussing? PPP (public-private partnerships)! Since 1991, we have been discussing whether to have PPP and we are yet to make up our minds. All the experts from the country and abroad got together and we studied what Brazil has done, what Argentina is doing and what UK has done. But now when power tariffs are at an all time high in the UK, there is no more talk of what UK did to privatise power. We are unwilling to think for ourselves. So as finance minister I will put money aside to encourage people to think for themselves.