'Rajat Was Not Directly Involved' 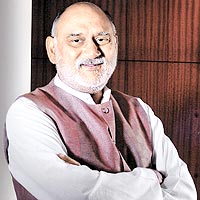 What are you doing to plug the gaps created by his departure?
One of the things that we are doing right now is closing in on an advisory board. We've got a bunch of portfolio companies coming up for exits (when PE firms sell their stakes in investee companies to book profits) in the next 24-36 months. So we're looking at people who can help us make the maximum improvement in those companies and introduce us to capital markets around the world. On the investing side, we haven't really felt a lag partly because there are ten other partners at the firm.

What will be the constitution of this board?
We plan to have at least three and maybe as many as 6-7 people. They should each be able to give us 30-40 days a year, which is 7-10 days in a quarter. There would be a couple of people from India, someone from industry and someone from finance. In Europe and the US, I would like to get somebody who is European with a combi-nation of industry and finance experience. Then I need somebody who is a supranational. This would be somebody from an organisation such as the IMF, the World Bank or IFC. Their relationships and values are different and I would like to get that sort of perspective.

You've had a couple of problems in the portfolio. What's the status there?
So we have one problem company, KS Oils (the edible oils producer is reportedly facing losses of Rs 400 crore). Somewhere along the way there was one piece of homework that we didn't do or it was so cleverly hidden that we couldn't uncover it. We did the usual due diligence and the accounting was fraudulent in the end. We don't know all the numbers yet. NSR partner Vivek Sett
has resigned from the company's board.

They have said they need to redo accounts. We need to see what those accounts are and whether we believe them.

You didn't think INX Media was a problem?
But a problem that we fixed! The entity that we invested in had three parts. There was an entertainment channel, a news channel and a music channel. When we began, we owned 20 per cent of this entity and we put in $40-44 million. Everybody (other PE co-investors) gave up on the company. They sold off the news division, closed the entertainment channel and didn't know what to do with the music channel. We brought in Pradeep Guha (former CEO of Zee Network) as a consultant and embarked on a plan to focus on the smallest piece of the business, music. Nobody else liked the plan. So we bought out virtually all the other shareholders, Pradeep put in some money and we now own about 80 per cent. We now have a company that is worth more than the money that we put in.

There is a talk of a new fund in 2013. How much of Fund I has been invested so far?
We've invested $750 million, including some follow-on commitments to existing portfolio companies. In terms of a new fund, 2013 sounds rights. But we need to have two conditions. The current has to be invested and we need some exits. By 2013, we should have two maybe three exits.

Which are the likely big exits from the current portfolio?
If the capital markets open up Ortel Communications (the Bhubaneswar-based cable television services provider
had filed an draft red herring prospectus) should exit. We should have some outcome with Ascend Telecom Infrastructure (telecom towers). Destimoney (retail financial services) is a very attractive company on the housing loans side. We've invested $92 million and it's a candidate. Coffee Day Resorts, which owns the Café Coffee Day franchise, could go public today.