'RBI May Bite The Bullet' 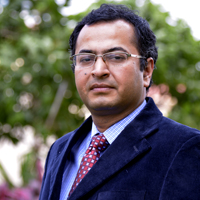 08 November, 2014
Print this article Font size -16+
Like everyone in the market, Rahul Goswami, CIO Fixed Income of ICICI Prudential Mutual Fund, is expecting the rates to come down gradually, and by March 2013, he sees the rates lower by 50-75 bps. He also thinks that RBI could go in for a 25 bps cut in repo rate on 30 October.

Meanwhile, in the absence of any unforeseen event, even if there is no rate cut, Goswami does not expect 10 year G-Sec yield going beyond 8.35 per cent. But on the medium term, he expect yields to come down to 7.8-per cent in the next 3–6 months with potential trading range of 7.75-8.25 per cent on the bond yield.

As a fund manager, Goswami has increased the allocation on government securities given that spreads have narrowed significantly between G-Sec and corporate bonds, but feels it’s unlikely to sustain for a long time and will increase allocation to corporate bonds if spreads widen. He sees 2-5 years' tenure for corporate bonds looking attractive on expectations of a gradual rate cut which will provide the opportunity to lock in the carry.


Excerpts from the conversations:

Are these testing times for the Indian economy as well as the market and why? When do you think the sword of uncertainty will move away?
The Indian economy continues to grapple with challenges coming from the euro zone crisis as well as the unsustainable current account deficit and fiscal deficit. However, on the positive side the government biting the bullet and initiating the reform cycle have boosted sentiment.  Reduction in oil subsidy and a cap on the number of subsidised cooking gas cylinders per household should help contain fiscal deficit by 0.2 per cent of GDP over the next 12 months. The firm resolve shown by the government in introducing reforms ensured that there were no roll backs.

Going forward, continuity in policy reforms, divestment decisions and other such steps to aid further fiscal consolidation will act as key positives for the economy and markets. Now is the time for execution to follow action. This will be the key to ensuring that the Indian economy while clearly being a structurally strong growth story continues to improve on fundamentals.

We expect continued effort from the government on containing fiscal deficit. Though it may potentially be inflationary in nature in the near term, in the long-term it is anti-inflationary and will thereby provide more room for RBI to bring down the rate structure.

Everyone is expecting a rate cut and even you expect 50-75 bps cut in interest rates in the next 6 months. First, why do you think he central bank will cut rates? Second when inflation and deficit are at higher levels, don’t you think cutting rates will further impact inflation and deficit or are you of the view that RBI will have to bite the bullet of rising inflation and deficit to boost growth?
It will not be an easy decision for the central banks to cut rates in light of the high inflation that continues to be out of the comfort zone of RBI. While inflation and high fiscal continue to be of concern, there are basic requirements of the economy which may warrant support from the central bank in terms of monetary easing. The investment cycle needs to be revived and growth continues to be much below the potential growth of rate + 7 per cent that the country can have. Hence RBI has a tight rope to walk of balancing inflation and growth. We therefore expect that RBI will only be able to take calibrated monetary easing stance in the form of a gradual rate cuts, CRR cut & bond OMOs.

As far as inflation and deficit are concerned, the government has already been taking steps to bring down fiscal deficit to more sustainable and moderate level. While inflation continues to stay elevated, the positive is in the fact that there is no more significant upside risk on inflation. We are confident that the government will continue to demonstrate intent and action towards fiscal consolidation and thereby hope and expect a good part of the Kelkar committee recommendations to be accepted and implemented. So the key trigger going forwards will be how the twin deficits pan out.

How much will RBI cut rates in the forthcoming monetary policy on 30 October 2012? What is your view on the liquidity in the system? Do you expect further cut in CRR and by how much?
As mentioned earlier, there are requirements on both sides i.e. inflation is refusing to come off and at the same time investment cycle is not picking up and growth continues to be much below potential.  Hence some monetary easing is definitely in the offing with the view to support growth. Whether it will by way of rate cut or reduction in CRR is yet to be seen.

In terms of liquidity, liquidity going forward is only expected to tighten in light of the seasonality witnessed in currency in circulation. Further liquidity will be a function of how government balances behave in times to come, going forward even if liquidity worsens further, we expect RBI to take the necessary steps to bring down the liquidity deficit within their comfort range of +/- 1 per cent of NDTL (net demand and time liability). Hence liquidity is not a concern given the comfort that RBI will continue to address any liquidity concerns that may arise as effectively as they have in the past.

What is your outlook on the Indian Bond market?
The 30th October policy is going to be the immediate key trigger. Lot of things will depend on the stance and method taken by RBI to provide monetary easing i.e. weather it will be through a CRR cut, a rate cut or a combination of both. But highest probability, RBI would consider a gradual calibrated monetary easing and would be willing to assign a 25-bps cut in the repo rate.

In case of a rate cut, the market will be cheerful and will give some headroom for yields to move down further. In such a scenario, we expect bond yields to soften further over a period of time. Even in the absence of a rate cut we do not expect a sell off to happen and bond yields are unlikely to go beyond around 8.35 per cent in the immediately foreseeable future, however, over the medium to long term basis expect bond yields to soften. Apart from rate cuts, market will closely track guidance from RBI on future monetary stance, global events direction, direction of commodities specifically oil and inflation expectation pans out.

Going ahead, what would be the fund house strategy to invest?
At ICICI Prudential AMC we have a framework that works on the principle of SLR i.e safety, liquidity and then returns. Aligned to this the first priority in portfolio construction is safety. Then comes liquidity followed by returns. On a standalone basis, we are very selective as far as credit opportunity is considered given that we manage money in fiduciary capacity and only look at it if it aligns well within our framework of SLR.

Last year, most of the fund managers made good money by keeping the money in short-dated securities. In current market condition where will you advice investors to invest?
We will always advice investors the same investment strategy as we follow in our portfolio construction that is to first focus on safety, liquidity and then return. Further their investment decision should be aligned to their risk appetite and investment horizon.

We expect short-term rates to ease off in the coming months based on RBI’s liquidity measures. This may benefit the 2-5 year maturity space. We therefore believe that the 2-5 years segment on the yield curve is attractive in terms of risk adjusted returns. In the second half of the financial year, the downward bias for the longer end is expected to accelerate once RBI starts conducting OMOs and hence investors should gradually tilt portfolio allocations towards the next step onto a higher duration fund.

Post government’s measures on fiscal consolidation, there is expectation that RBI may support government’s efforts through monetary action. Further RBI is likely to conduct OMOs to ease liquidity. These measures will be positive for long duration funds and offers a reasonable opportunity to enter Gilt and Income funds.

What is your take on the 10-year G-Sec yields and why? Where do you see the G-Sec yield in the coming 3 and 6 months? Do you think it is good time to buy G-Sec (what would be the tenure) as further demand for G-Sec and rate cut will help in making some capital gains?
The direction of 10 year G Sec yield is also going to be a function of the RBI action on 30th Oct. In absence of any unforeseen events happening, even if there is no rate cut we do not expect 10 year G-Sec’s going beyond 8.35 per cent but on the  medium term horizon we expect yields to have a downward bias and come down.

In the event of calibrated monetary action, space will be created for yields to go down further and may result in 10 year going down to the 7.8 per cent range in the next 3–6 months time.  Direction will also further depend on how RBI caters to the liquidity conditions in the future given that we expect stress on liquidity over the next 6- 8 weeks. We anticipate a potential trading range of 7.75- 8.25 per cent on the bond yield. Any rate cut move or OMO will only help the bond yields to soften.

As a fund manager how are you managing the money in your portfolio and where are you investing in this market?
We have increased allocation in the portfolios to government securities given that spreads have narrowed significantly and is unlikely to sustain. We may further increase allocation to corporate bonds if we see spreads widening to a more comfortable level.

What is your take on the 1 year, 2 years, 3 years, 5 years and 10-years yields in corporate bonds? Will you be a buyer in corporate bonds and what would be the tenure?
We believe that the 2-5 year tenure looks attractive given the expectation of a gradual rate cut which will provide the opportunity to lock in the carry. On a relative basis corporate bond spreads are too tight against sovereign bonds and where we may see central government securities outperforming corporate bonds over the next 3 - 4 months

Will you be an investor in PTC, CD and CP in these markets and why? What are the yields you are looking at in these instruments?
We will look at opportunistically investing in PTC, CP’s and CD’s and will depend on the levels and liquidity conditions at that point of time. In the current context CP‘s and CD’s will be preferred. We may not be keen participants in PTC’s given the lack of clarity on the segment and the current taxation of PTCs.