‘RBI Has Overreacted, It Needs To Let Go’ 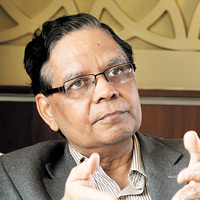 08 November, 2014
Print this article Font size -16+
Arvind Panagariya, the 60-year-old professor of economics at Columbia University, New York, has been in the US for 38 years. The Padma Bhushan awardee has also done stints with the World Bank and held the position of chief economist at the Asian Development Bank. But for the past five to six years, his focus has been India. In 2008, he wrote his first book, India: The Emerging Giant. For the past three years, he has been working on a five-book series on Indian economic policy for Oxford University Press. Two of these are out and three are on their way. He spoke to  BW’s Anjuli Bhargava on his latest book, India’s Tryst With Destiny. Excerpts:

In your 2008 book, you called India an emerging giant. But India seems to have remained the same ever since...
No, we have made progress. In my book, I said that India has shifted its growth rate to 8-9 per cent in 1993-94 and when I gave the manuscript in 2007, there was still a very live argument as to whether this was just a “cycle effect” and whether the growth rate would shift to 8-9 per cent and then just go back to 5-6 per cent. My own reading is that India’s growth rate has shifted to a longer-term trajectory of 8-9 per cent rather than just being a cycle effect. In fact, we did quite well even during 2008 relative to many others.

Your earlier book argued that India had moved to a higher growth trajectory. But that has not been the case for the past  year. What happened?
In the last one-two years, two big factors have been at work: a series of decisions by the environment ministry, where permissions have been denied to the industry. Government policy and permission became quite intrusive and restrictive. Then this was followed by corruption scandals and policy paralysis; another factor is that the Reserve Bank of India overreacted and it continues to do so. Inflation at 5 per cent was a phenomenon that lasted eight-nine years (1998 onwards) but inflation outside that period has always been higher — even in double digits. To think that India cannot tolerate more than 5 per cent inflation and to peg the entire policy on that makes very little sense. You need to let go...let money supply expand a bit.

This growth blip — is it a one-year thing or will it continue?
I remain optimistic. I think 2012-13 may still be low-growth — maybe 6 per cent or so. But I think in 2013-14, we will come out of it (7 per cent or so) and then, of course, the elections. I think after that we should get back to 8 per cent-plus. Hopefully, the government of the day will be more reform-driven.

It is also interesting that what we now view as a crisis has changed. Earlier, we had a crisis if growth dipped below 5 per cent. Now, a drop in growth to 5.5 per cent is considered a crisis. We now think 8-9 per cent is normal.

What is the thrust of your latest book?
We argue that the thrust of Nehru’s policy leading India towards socialism was not the right way to go and this, under Indira Gandhi, became really restrictive. The central economic objective was poverty removal and growth was seen as the instrument. But what happened was that the wrong policy framework got adopted and growth never materialised. And poverty did not decline. When Gandhi became PM, the socialists came to the forefront. There was always a very hardcore socialist wing in the Congress party which Nehru had kept at bay.

It is during Gandhi’s time that some of these myths began to spread. One was that we focus too much on growth and we ignore poverty. But what they did not realise was that growth never happened because of the restrictive environment. A second myth is that there have been reforms but poverty has not been reduced. (But) you can take the overall poverty figures, which are steadily coming down. We cannot find a single state where poverty has not declined.

We examine why poverty reduction has been much faster in some other countries that have seen rapid growth like Taiwan, South Korea and China. What we find is that while India’s growth has been inclusive, it has not been as inclusive as it could have been. I remember in the 1970s, most gifts that we brought home were made in South Korea or Taiwan. In the 1980s, it was mostly made in China. ‘Made in India’ never happened. We have not been able to create the jobs which would pay well and take the workers away from agriculture.

This is where we come to Track 1 and Track 2 reforms. The latter relates to redistribution policies and Track 1 relates to growth-oriented policies which focus on inclusiveness by promoting industries which will help employment.

Do you agree that the cause behind the rich-poor divide is because the rich have gotten much richer, while the poor have not?
In any economy, be it South Korea, Taiwan or China, if you are growing at rates of 8-10 per cent, there is no way that inequality will not rise. It has to rise because somebody has to create that wealth and the one who does will keep at least 5-10 per cent of it. He will turn into a billionaire in 10-15 years. We have seen that happen in India time and again. Sunil Mittal, N.R. Narayana Murthy, Azim Premji — all are first-generation.

We really need to go after labour market reforms. Our book also focuses on higher education reforms. This is one area where no government has moved. The area of higher education has been a huge gap and reforms in this field are now crucial.