‘Politicians Should Also Be Measured’ 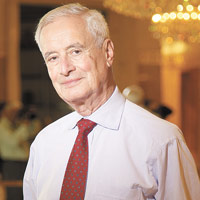 08 November, 2014
Print this article Font size -16+
Two decades after it was created, the Balanced Scorecard still remains one of the most widely used performance management tools in business organisations. Harvard Professor Robert S Kaplan, who created this long-standing framework along with David Norton, was in Delhi recently to receive the second Global Management Guru Award instituted by the Birla Institute of Management Technology (BIMTECH), Kaplan talked to BW's Chitra Narayanan about the role of theoretical frameworks in business practices, and how it can help governments and politicians too.

Is theory keeping pace with the rate at which businesses are changing?
The competitive situation continually changes, but we have the framework to help organisations describe the strategies they are using. The framework is flexible enough to handle changes. It is not specific to any particular form of strategy or any particular form of competition. Whatever the environment is you have to get good financial results, and you do that by identifying who your customers are, what you should do to meet their expectations and win their loyalty, what are the skills you need to build value to your shareholders and so on. Our framework forces you to ask these questions.

No matter what competitive environment you are in, every organisation has to ask those series of questions. That’s why the framework created in the 1990s, worked even during the Internet era, used by the dotcom companies and the newer companies.

Managements need to keep changing their thinking, but they still need a system to describe their strategy, communicate their strategy, allocate resources against whatever the strategy is, and develop people’s capability to implement the strategies. And that’s what our framework does.

Q. From your original four boxmodel, the Balanced Scorecard framework  of performance/ output evaluation has evolved a lot? Which of the adaptations are significant?
It’s not adaptations as much as enhancements. It’s like seeing the growth of a baby. The baby is 20 years old now, but still has same DNA. It’s still the same child, only with more enhanced capabilities than when first born.

A big enhancement was introducing a strategy map. The idea of strategic initiatives was not there in 1990, when our first article came out. But the idea that we have to allocate resources, plan which initiatives and projects are most important to achieving performance targets, that was important.

Before we do the balanced scorecard of measures, we now do strategic objectives. It describes the cause and effect linkages, and how strategy gets implemented. That has been a very powerful enhancement.

How to measure human capital was not there in the first ten years. People measures were the weakest part of balanced scorecard. But fortunately we were able to develop a better way of thinking on that, and show how closely aligned employee knowledge and capabilities were to succeed in creating value for customers and shareholders.

A major advance was also the idea that you need an office of strategy management, as the system does not run by itself. You need to develop a small staff group that helps the organization build its various strategy maps and scorecards for different business units. Also, the strategy execution system  - implementing strategy and getting feedback on it - is a major advance.

You can think of the office of strategy management as the leader of an orchestra. They help you play the music, they didn’t compose the music, and neither are they responsible for playing the music, but they keep everybody in tune.

Which of the companies have successfully used the framework, benefitting from it?
All through the 20 years many companies have done it. Norton and I had created a Hall of Fame of companies that are using it successfully. We had 170 organisations on the list, and this includes Infosys.

Infosys has been a great implementor of the system in India. Sanjay Purohit (the chief visionary) came to my office at Harvard Business School six or seven years ago. He said, we are using the balance scorecard for the last five years, because we keep changing our strategy, we are on our fifth strategy and we needed a scorecard to drive and communicate the strategy and to track our progress.

Infosys has done some extensions as well to the framework. Infosys has built a scorecard for its clients to manage its relationships with them.
So it is used not just within its internal organisation lines but also with strategic customers. This enables them to jointly describe how to create value in the relationship. It’s no longer just another outsourced arrangement, but a collaborative arrangement between Infosys and the customer to jointly create more value for both companies. We wrote a case on Infosys and its relationship scorecard.

The way you work is to identify a problem and then come up with a framework. What are the current problems that require a theoretical intervention?
It’s healthcare. It’s a problem for that sector because it is a big sector, but it’s also a problem for other businesses, because in countries like the US, healthcare benefits are paid for by the employers and it is becoming an increasing cost for companies. For many companies their biggest supplier is not steel or engineering but health insurance companies.

Healthcare sector is poorly managed because it lacks good data about its costs and outcomes. I do measurements so it is a very fruitful area for me to examine and work.

How far has your work progressed on this?
It’s still in the early stages. I am doing this with Michael Porter (his colleague at Harvard and strategy guru). It’s essentially his framework and his idea on how to make the healthcare sector compete on value, in the same way that every other sector competes

It’s a situation where the basic method, I have already invented and created, now we have to apply it – that will be challenging and interesting.

Will it be applicable everywhere?
Oh yes. It’s not about how you finance healthcare, which is different country to country. But how do you pay the providers, how do you decide which providers you are going to pay and on what basis. Every healthcare system in the world has the same issue – about the basis of reimbursing healthcare providers for the medical care they deliver.

Our approach is to reimburse based on outcomes you have produced, and at a price level that covers your cost. If you are operating inefficiently it will not cover your costs.  But it’s a long journey.

Today, if you have couriered a package, you can watch how your package moves every step. But a healthcare giver does not have the same knowledge about a patient that a Fedex or a UPS has about a package.

What are the other problems that you are looking at?
The other area where there is a gap is risk management. In 2007-08, a lot of companies failed because their risk management systems were inadequate. When unexpected and plausible events occurred, they were not able to react in time for that. That’s a gap in current practices. And a huge gap in teaching. I know no business school has invested in risk management. We were trying to teach it and found that there was not adequate knowledge to teach it.

Have the tools got easier for you and speeded up your work?
Certainly, the  availability of software and transactional database has made a lot of our work easier.

I remember in 1980, we had to download information from six or eight different legacy systems and on five and a quarter floppy disks. And the information came from different databases. You had engineering data base, manufacturing database, customer database, purchase database – you had to get information from all and integrate them and do activity-based costing.

Now it’s all integrated. You just have to have your activity based costing software sit on top of that database. And you get Transactional infromation. If you work with a large retailer that has 200,000 skus and tens and thousands of customers, all that information is recorded. We couldn’t do it a few years ago.

So your new framework can get ready much faster?
Yes, it is much more feasible and can take on added complexity as well.

There are projections that India will become the third largest economy in the world by 2020. Given our falling growth rate, do you think we will get there?
The problem is not with Indian businesses, but with India’s government. India is obviously very entrepreneurial as demonstrated not just here, but in the United States. But the government is not doing what it should be doing, which is putting in enabling infrastructure - roads, trains, ports and facilities. That will be the biggest constraint for India’s growth.

Has any government adopted your management framework?
Some countries are doing quite a bit of work – the middle east, UAE, Abu Dhabi, Dubai, Qatar, there is a lot of pick up there. Brazil, interestingly is doing it.

In the Philippines, there is an organisation that uses our Balanced Scorecard to train mayors of cities on strategies, and they have been very successful. A couple of years ago 30 of these mayors were using this strategy and 29 got re-elected. It shows that the mayors who were creating value got re-elected.

If you can show the politician that you can increase your chance of getting re-elected if you show positive performance,there might be more adoption. But very few politicians are open to being measured.

When Rudy Giuliani was trying to get elected as the Mayor of New York, he said the crime rate in New York city is too high. If you elect me, I will bring it down. He put in a series of measures during his term to attack crime. At the end of his term, he showed, here’s the data – I lowered the crime rate by this much, elect me again. He served two terms as Mayor.

It’s very rare for politicians to run on such a platform of performance. I would like to see more of that. Most politicians run on how much money they can distribute to their supporters.