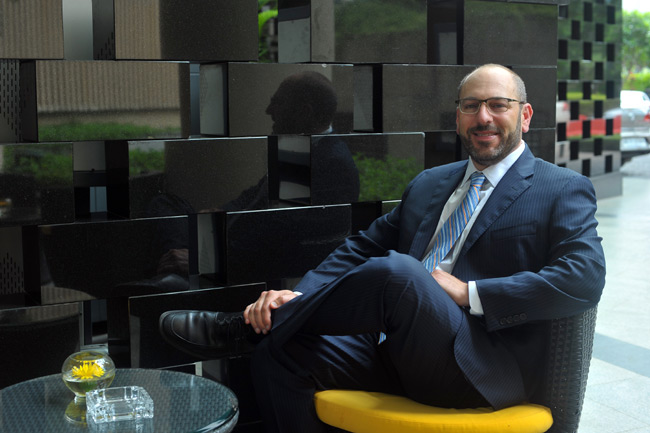 16 June, 2015
Print this article Font size -16+
Ensuring the quality of medicines manufactured in a country is a combined responsibility of the industry, regulators and, overall, the duty of the respective government as trust is a critically important factor in the field of healthcare both in terms of securing human life as well as sustaining the business reputation, says the chief of United States Pharmacopeial Convention or USP, the world’s largest drug standards referral body.
“Creating and establishing quality standards for medicines is a combined responsibility of all the stakeholders, including the industry and the regulator, as any negative report, may be caused by one player, ultimately affects everyone in the market,” said Ronald T Piervincenzi, chief executive officer of USP, who was in India last week to oversee the process of ramping up its India operations in its tenth year of existence.
“Patient trust (on a medicine) is probably the most critical component that has a bearing on the impact of healthcare,” said the USP head in an exclusive interview with BW|Businessworld in Mumbai.
Quality of medicines manufactured in India has been a hot topic of discussion globally after the US drug regulator’s series of actions on a number of large pharmaceutical companies in the country recently. India is currently one of the top generic medicine exporters to the world markets and the US in particular.
The US Food and Drug Administration had banned all the US approved manufacturing sites of Ranbaxy Laboratories in India from exporting to that market since 2008 due to serious violations in the quality manufacturing norms. The US agency tightened its monitoring on the Indian industry had also initiated similar actions on the manufacturing units of Wockhardt, Sun Pharmaceutical Industries and a few others in the last couple of years.
“It’s not something unique to India as there are similar cases in other parts of the world as well,” says Piervincenzi.
“I remember a series of similar cases in the United States, probably in the mid-2000 or so, mainly on the over-the-counter products side. But, over a period of time, everyone forgets the names of the companies involved in the issue, but will remember it as a few cases in the US,” he added.
India’s drug industry, which is worth about Rs 1,50,000 crore, currently exports at least half of its production to various international markets. A predominantly generic or off-patented drug producing industry has some 546 US approved factories and 857 production units approved by UK drug regulator and another 1295 facilities authorised by the World Health Organisation’s good manufacturing practice norms.
Complying with the frequently changing current good manufacturing norms set by all these agencies is challenging for the industry. But, a weak drug regulatory system in India often prompts industry players to often take chances of ignoring the intensive compliance mechanism leading to quality issues. A recent survey by consultancy firm Deliotte India had found acute shortage of trained professionals is one of the key reasons for failure in the compliance process.
Another survey report released by consultancy firm EY last week had also observed that one third of pharmaceutical companies in India have not conducted reviews to assess potential gaps in data integrity, a key issue raised by US FDA for their actions on Indian drug makers. EY’s fraud investigation and dispute services team conducted the survey to assess the state of compliance related to data integrity compliance faced by pharmaceutical companies in the country.
US Pharmacopeial convention that creates referral standards for quality drug manufacturing mainly in the generic medicines space by collecting and validating manufacturing process references from the industry has had its direct office in India since 2006. The quality standard referral agency, which was established in the US in 1915, has about 4500 monographs (set of quality standard references for different drug formulations) compiled in its pharmacopeia.  The other leading drug standard referrals followed by generic drug manufacturers across the world, includes British Pharmacopeia (BP) and Indian Pharmacopeia (IP). USP standards are currently followed by drug industry in at least 50 countries including India.
USP’s Indian facility, which is its largest outside the US, currently has a team of 150 people and a well equipped laboratory for processing and formulating drug standards.
The USP chief said that it wanted to expand the capacity of the Indian facility, which contributes about 25 per cent of the USP’s total scientific activities, by adding people and infrastructure in the next few years.
Tags assigned to this article:
corporate pharma othertop1 usp c h unnikrishnan ronald t piervincenzi