'My Room Is A Private Chamber Of Secrets' 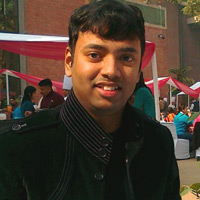 08 November, 2014
Print this article Font size -16+
Journalists and cops are trying to unravel the mysterious and brutal murder of historian Ram Mathur on the banks of Ganges. Mathur's daughter Sia and a bestselling author Om Patnaik embark on a journey of clues and riddles to solve this murder mystery. Satyarth Nayak's debut novel 'The Emperor's Riddles' is full of Buddhist motifs, lessons from history books and like the title says a dozen or so interesting twists and riddles. Nayak is an admirer of Dan Brown thrillers and has concocted a desi twist to Brown's works. "The book is almost like a tribute to the man by way of creating a desi Dan Brown mystery," says Nayak. He tells BW's Sanjitha Rao Chaini on what went into the making of his debut novel.

Tell us a bit about 'The Emperor's Riddles'. How did the idea of writing the book come to you?
The idea grabbed my collar when I stumbled upon the fascinating legend of the Emperor that forms the backdrop for my book. It was so intriguing and so detailed that my instant reaction was to create a plot around it. The thought that such a captivating secret was lurking in the shadows of our ancient Indian history mesmerised me. That’s how the journey started.

There are similarities with Dan Brown's 'The Da Vinci Code'. Like the way there are clues on Mathur's body, and references to religious motifs, which is believed to have messages hidden in them.
Of course, and quite consciously so. I have always been an admirer of Brown’s thrillers and somewhere down the line, there are similarities. It’s almost like a tribute to the man by way of creating a desi Dan Brown mystery. Like my editor says, the formula is familiar but what you do with it makes the book your own individual creation. Regarding religious motifs, this is probably the first thriller that actively uses Buddhist mythology and iconography, which also makes the book unique.

The book is peppered with book titles, scriptures, mythology... what kind of research did you have to put in to bring out this book? Did you have to start from scratch...?
The fact that the legend was full of details made my job a lot easier. But a lot of research went into faithfully recreating the ancient era since the track of the Emperor’s evolution runs parallel to the main track of the murder intrigue. This is a history meets mystery book and historical research was of paramount importance. Lot of research also went into creating those riddles in the book since they are a blend of history, mythology and urban legends.

How long did you take to write this book? And tell us about the journey from manuscript to published format?
The first draft was done within six months. The final version took about a year-and-a-half. I was fortunate to get Red Ink Literary Agency as my literary agent. The excellent team at Red Ink really made my life easier. They pitched the book around and we finally signed up with Amaryllis. I will always remain indebted to my publishing house for their faith in a debut author and for packaging and distributing the book so perfectly.

Murdery mystery writers you like to read...
Agatha Christie, Arthur Conan Doyle, Sue Grafton, Byomkesh Bakshi are my all time favourites. Also, love to watch ‘Midsomer Murders’ and ‘Murdoch Mysteries’. My book’s climax that everyone has loved so much is inspired by all these great writers who made sure their final twist was absolutely spectacular.

What's the hardest thing about being a writer?
The hardest thing is to actually write. A writer’s head is full of a million ideas, each calling out loud and clear. To actually sit down and put one of these ideas down in black and white is the challenge. Also these days, promotion has become a big deal and after you finish writing, the writer also needs to promote his work as much as possible.

Tell us about your writing schedules. When and where do you write?
Schedules don’t work for me. There are days when I am typing away furiously and days when I can’t pull a single line out of my head. But I generally prefer writing late into the night. Quite therapeutic. My room is where I write. That’s the private chamber of secrets where all my zany ideas come to life. Enter this space and you will find way too many thoughts floating around in despair.

What makes a book a really good read or a bestseller?
I am sure every author would want to know that secret. It’s like asking what makes a film a blockbuster. Besides it’s highly subjective. What works for you may not work for me. The belief every writer writes with, is that since he finds it interesting, others will do the same. Also, a good read and a bestseller are two totally different entities. A good read may not always become a bestseller and a bestseller many not necessarily be a good read. As an author, you need to decide which of these two is your goal.

What are you reading now?
'Gone Girl' by Gillian Flynn.

So, what's next?
Right now am taking a break and enjoying the success of the book. That it has become a national bestseller in four months of its release and already gone into reprint is a big relief. Next will be a mystery thriller again but this time I am looking at exploring fantasy and supernatural. Let’s see.