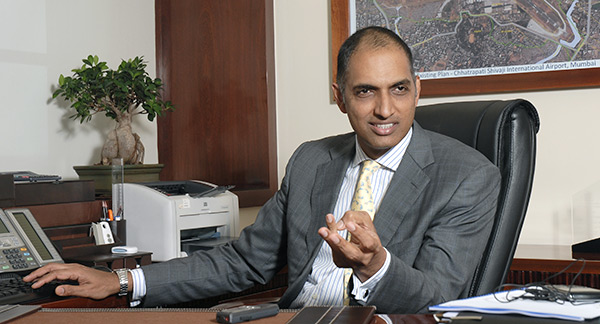 08 November, 2014
Print this article Font size -16+
G.V. Sanjay Reddy, vice chairman, GVK group, talks about the way forward on infrastructure and what he’d like the government do to improve roads, generate more power and finance new projects across sectors – whether during the Budget or outside of it.

What in your view is the way forward on financing of infrastructure?
The Government of India estimates that a total investment of Rs 97,000 crore would be required in the infrastructure sector during the Twelfth Plan period (2012-17). Mobilising investments of this order will require a two-pronged approach. Adoption of innovative way of financing to overcome funding limitations like facilitating additional funding from banks and NBFCs, increased participation from insurance companies and pension funds, facilitating flow of foreign funds (ECBs and FDI) as well as development of the infrastructure bond market in India and also undertaking a comprehensive review of the enabling policy and regulatory environment to make investment in infrastructure more attractive.

Will different approaches work better for different sectors - roads, airports, power and so on?
While broadly the issues affecting the entire infrastructure vertical may be the same like availability of low-cost affordable finance and greater transparency in regulatory environment, the government has no other option but to follow different approaches for every dector as they are plagued by different sets of problems. While the roads & highway sector requires greater clarity on issues like total project cost, dispute resolution mechanism, land availability etc, airports require greater clarity on concession/policy related issues. The power sector is grappling with acute fuel shortage which has led to the creation of stranded assets and dismal financial health of the distribution companies. These and other issues affecting the sector need to be addressed on a priority basis by dividing them into short-, medium- and long-term objectives.

What is a possible solution to the roads and highways problem where many developers have gone wrong on traffic estimates, over-aggressive bidding and have promised high premiums? Do you think PPP is of limited use in this sector ?
Over the years, PPP has evolved as the preferred mode of implementing road projects with the sector seeing robust participation of the private sector. In 12th five year plan (2012-17), 405 projects worth $29 billion have already been implemented via PPP model, amounting to 40 per cent of the total investment envisaged in the sector. However, there have been challenges both on the funding as well as execution side impacting the viability of projects and in turn the financial health of infrastructure companies. With developers being stuck with progress on earlier projects, the response towards bidding for new projects has been low with NHAI achieving only 15 per cent of its targeted project award in FY13.

What in your mind needs to be done to revive power generation in India?

Some key reforms that need to be undertaken on an immediate basis include:

Fuel Shortages: To address the fuel shortages issue, the rate of coal exploration needs to be stepped up through coal sector reforms, including privatisation of the sector and infusion of technologies; there is also a need for better coordination between the importers, port authorities and Railways for improved utilisation of infrastructure.

Distribution Reforms: While the debt recast plan introduced in September 2012 is a welcome first attempt to undertake reform in the country’s power distribution sector, it needs to be backed by further reform measures else it would provide only a temporary reprieve from weakening finances.  The lowering of Transmission & Distribution (T&D) losses needs to be a key thrust area for the Government and Industry alike as energy saved and conserved translates into capacity addition.  Moreover, managing the pricing of energy is extremely important today. Therefore, a transparent system of funding subsidies is also extremely important. Finally, a transparent tariff revision mechanism and a move towards the adoption of a multi-year tariff frame-work are the other solutions for a healthy electricity distribution sector in the country. The Government and the industry need to work towards ensuring a strong momentum for these measures.

Ensure Cost-Reflective Tariffs: This is the single-biggest lever to ensure the viability of the distribution sector, although politically this remains the most difficult. While the usual options (for instance, linking payment to performance, open access and so on) should continue to be pursued, leveraging Aadhaar to pay subsidies directly to economically weak families is a promising area to explore.

Peaking Power Policy: It is also important to put in place a policy for procuring peaking power to address the peak power deficits.