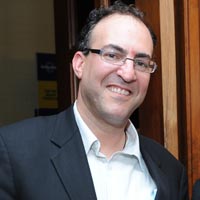 08 November, 2014
Print this article Font size -16+
The timing couldn’t have been better. Thirty years ago Lonely Planet’s founder Tony Wheeler wrote his award-winning guide to India. Last week during the 30th anniversary celebrations of the book, the company (now owned by BBC Worldwide) announced its big plans for India, flagging it off with the Lonely Planet Indian Traveller Series. These are outbound travel guides customised specially for Indian tourists. “Five years ago would have been too soon to launch in India, but it’s now that we are really seeing independent travel taking off in the country,” says Matt Goldberg, CEO, Lonely Planet, pointing to an exciting metric. By 2020, he says, according to a Lonely Planet market research study, there could be 50 million Indian tourists headed outbound. “We are excited by the opportunity,” says Goldberg. In conversation with BW’s Chitra Narayanan, Goldberg along with Sesh Seshadari, GM Lonely Planet India, outlined their “crowded” plans for the country.

Where does the Lonely Planet India book rank among your country guides? How has it done in the last 30 years?
The India guide is among our top 10 books in terms of number of copies sold (Thailand is the top seller). We had launched it in 1981 with a premium positioning. I would say, cracking India -- which is a very diverse and tough place to understand -- was very important for Lonely Planet. After the publication of the India guide in 1981, we really gained the confidence and our market share grew. We have sold 2 million copies of this volume, and it is in its 14th edition.

What are your plans for the India market?
India is only the fourth country where we are setting up office. (Lonely Planet has offices in the UK, Australia and the US). One of the core components of our global strategy is to take our model and enter emerging markets that we think will grow very well. The metric we looked at is 50 million oubbound by 2020 and that is just a small slice of the domestic travel activity going on in India. So, we are excited about the opportunity.

Any targets?
We are launching 10 guides this month. The target is 40 guides in the next two years, written by Indian authors, and three of these would be domestic destinations. These are addressed at the travel reader. We think there is great demand here. We will see how people are using it, before moving to the next level. We are starting with print guides but are excited about the digital opportunity too. We have a website for India.

How are your offerings going to be differentiated from others, especially the domestic ones?
We have started with comprehensive market research on what Indian traveller experiences are, and what they want from our guides. We invest in sending experts to a destination. As we say, ‘we know because we go’. We don’t accept freebies for our coverage. We won’t even have advertising in our guides and it is truly independent advice.

How do you choose your experts?
It’s a rigorous process. For India, we held a workshop for authors who had applied to us. We got 70-plus applications. Out of these, we shortlisted 45 people and then gave them some money to go out on a three-day visit to some place and come back and write about it the Lonely Planet way, taught to them at the workshop. Only about 17 qualified.
How would you define the Lonely Planet reader?
Travellers who are open minded and curious and want to get to the heart of the destination. The positioning for India will be to add in cultural experiences such as food, and focus on aspects such as safety, and ease of getting around. For India, we would also bring in a family perspective to travel. The Indian traveller our research finds are of two kinds: the experience seeker and the social traveller.

How has your growth been? And is digital growing faster?
We are growing 5 per cent year on year, which is a good figure in this industry. In 2009, when I joined the company, the digital stream contributed less than 10 per cent of the revenue. Today it is around 25 per cent and going forward I believe the ratio will be 50/50. We have invested a lot in our web offerings, and we have 8,000-plus destinations on our website.

In digital, where are the revenues coming from?
The source of revenues is from product sales, advertising, from transactions and from licenses. At the moment product sales contributes the most, followed by advertising. But going forward we believe transactions will get bigger. We are pioneers in mobile apps and have had nearly 10 million iPhone app downloads.

What about television activity in India?
Given our BBC Worldwide parentage, yes, it’s a possibility. Though not in the long term. We have just launched four new shows in the US.
Tags assigned to this article:
exclusive to web news 7 books travel web exclusive chitra narayanan matt goldberg lonely planet